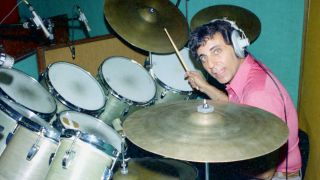 Hal Blaine - one of the most prolific session drummers of all time, has died aged 90.

Hal was best known for his work with the infamous Wrecking Crew: a legendary collective of studio musicians including Carol Kaye, Tommy Tedesco, Glenn Campbell, James Burton and many others.

Together, The Wrecking Crew became the backbone to producer Phil Spector’s ‘wall of sound’ productions, utilising the echo chambers at LA’s Gold Star Studios to complete the huge reverb on early '60s cuts by The Ronnettes, The Crystals and The Righteous Brothers.

A statement released on the drummer’s official Facebook reads: “Hal Blaine - loving father of Michelle Blaine; grandfather of Anthony, Josh, Aaron, Whitney, Tempest, Ever and Lyryk; and inspiration to countless friends, fans and musicians - has passed on today, March 11th, 2019 at the age of 90.

"May he rest forever on 2 and 4. The family appreciates your outpouring of support and prayers that have been extended to Hal from around the world, and respectfully request privacy in this time of great mourning. No further details will be released at this time.”

As part of The Wrecking Crew (the nickname given to the group by Hal himself), Blaine provided the backbeat for some of the biggest hits during the golden age of pop songwriting: songs from the likes of The Beach Boys, Frank and Nancy Sinatra, The Byrds, The Carpenters, Simon And Garfunkel, The Mamas & The Papas and more, racking up a relentless 40 No.1 hits, and a further 150 Top 10s throughout the '60s and '70s.

Paying tribute to Blaine, who played on both Pet Sounds and Good Vibrations, Brian Wilson wrote on Twitter, "I’m so sad, I don’t know what to say. Hal Blaine was such a great musician and friend that I can’t put it into words.

"Hal taught me a lot, and he had so much to do with our success - he was the greatest drummer ever. We also laughed an awful lot. Love, Brian"

The Wrecking Crew's Hal Blaine: my 11 greatest recordings of all time

Always striving to provide the best performance for the song, Hal will be remembered by musicians worldwide: not only for his phenomenal output, but also for carving out the definition of pop session drumming.

His professional attitude and dedication to delivering an impeccable performance remained with him throughout his career.

He told Dom Famularo’s The Sessions in 2017: “A song is a story, if you’re up there showing off then people are not hearing the words to the story. So I never recorded a song before I listened to it. I want to know ‘What’s my motivation?’…Be a gentleman. Take care of the song. Listen to the song, and just show a little interest, that’s all. I have this saying 'If you smile, you’ll stay around a while. If you pout: you out!'”

Blaine’s contribution to music was recognised in 2018, when he received a Grammy Lifetime Achievement Award, having previously contributed to six consecutive Grammy Award-winning Record Of The Year songs between 1966 and 1971.

I’m so sad, I don’t know what to say. Hal Blaine was such a great musician and friend that I can’t put it into words. Hal taught me a lot, and he had so much to do with our success - he was the greatest drummer ever. We also laughed an awful lot. Love, Brian pic.twitter.com/vLOX3RIKc611 March 2019