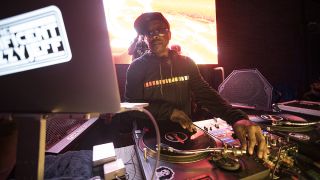 When a 17-year-old Will Smith said, “No other DJ alive can command the respect up on the wheels of steel like this man does,” this was no hollow boast.

Back in 1986 The Philly turntable titan was widely regarded as one of the best scratchers on the planet. And on their recording Live At Union Square, Big Willie wanted y’all to know that. At the time he’d wiped the floor with the best jocks in battles at the New Music Seminar, and would go on to push and pioneer techniques and routines in the decades that followed.

Today, Jazzy Jeff remains at the forefront of the culture, working closely with companies like Pioneer and Rane to help develop cutting-edge kit, without ever losing sight of what it means to be a DJ: Rocking the crowd.

If you want to get Jazzy like Jeff, check out some of these great hints and tips that he says will make you become the best DJ you can be. Jeff, break it down.

1. Go back to school

“Back in the day we had to learn it all ourselves, but now you have all these cool places online, and in the real word, to help you learn to DJ. It's crazy, you know?

“Skratch Bastid has his thing where he shows people how to get busy. Qbert has his Skratch University school. The Beat Junkies from Los Angeles have an amazing school called the Institute of Sound. And there's a bunch of other great scratch academies around the country…so there are definitely places to check out if you are interested in learning how to begin.

“They have everything from the basics, to all the way up to the most advanced techniques. So, if you want to start, there are places you can go, in person and online, where you can do that.”

“One of the first scratch techniques you’ll need to learn is called the Baby Scratch [grabbing a sound on the deck and simply moving it back and forth with your hand, without using the crossfader].

“I think the Baby Scratch and Chirps and Transforms are the gateway to all the intricate scratches that you can do. It's almost like scratches are combinations.

“You know what I've realised? Simple can sometimes be best. I’m a huge fan of all the most intricate scratches, and I see dope DJs that I'm going crazy inside over, but I look around and no one else understands.

“I've seen some of the most basic things translate in such a big way. That's a lesson I learned along time ago. When Will and I first started going around the country with me doing DJ routines, it was so early on that there were places that didn't have DJs that were doing these routines at this time. It was amazing. I would finish and there would be 10,000 people in utter silence.

“That's where the whole concept of Will saying things to me like, 'Make it sound like a bird – Make it Chirp' as I was scratching. He would explain to the crowd what was happening. We knew we had to bring it down to a level where the people could understand. That was a very, very important lesson that I learnt early on.

“I don't care how intricate you are. If you go beyond someone's knowledge of what it is, it's not gonna translate. I always try to mix the funkier rhythmic stuff in with the technical stuff. I understand that all the super technical stuff I do, I'm just doing that for the other DJs. But the basic stuff, the stuff that translates. You gotta bring that.”

“I remember doing an event a long time ago and I was doing this routine and then [legendary hip-hop DJ] Kid Capri walked up for his set and put the needle on the turntable, moved the crossfader on, and started tapping on the record and everybody went crazy! I loved it.

“I know a lot of great DJs, but there are only a few smart ones. Being smart is knowing who you’re playing for, and knowing just how much to give them. You gotta give them a little bit of stuff to say, 'Wow! What did he just do?' But not going so far to the point that they can't comprehend that.”

“I started scratching in the dining room of my mother's house, and I didn't want her to say, 'That's noise!' So I would literally put on jazz records and I would scratch to the pattern of jazz records. Because what I wanted to do was be a part of the record.

“I wanted to be a percussionist on the song, instead of overdoing it. And I wanted to do it because I didn't want my mom to say, 'What are you doing, making that noise?'

“That's where a lot of my style came from, because instead of trying to be all over the top of the record, I wanted to be one of the band. I wanted to find my spot. You can do that in any style of music, too, not just hip-hop.”

“Scratching is like seasoning. All of us are chefs and everybody spices it up in different ways. Sometimes people put on a lot of seasoning on their stuff and some people don't put on enough.

“It's up to you to figure out where you put that seasoning at. It really is. Whether it’s finding new ways to do classic routines, or whatever, you just have to find out what your taste is and build on that.

“Same with working with rappers. When DJing for MCs you wanna give them their space to add their flavour, too. You wanna figure out where their punchlines are and give them accents with some choice cuts.

“Follow their flow and cut around them. Don’t just throw all the ingredients in at once. Learn your craft. Take your time. Then you’ll be a dope DJ.”

For all Jazzy Jeff’s latest news, releases, and live dates, head to his official website.