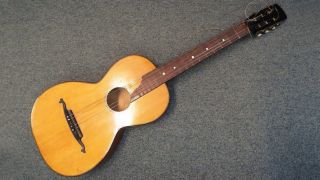 A guitar that could be the very first six-string owned by George Harrison is set to go under the hammer next month.

The no-name nylon-string was found in Harrison's childhood home by its new occupants, and is believed to pre-date all other guitars played by the Beatle.

Career in gear: The Beatles

Prior to this finding, Harrison's first guitar was believed to be an Egmond steel-string, which is now estimated to be worth $800,000.

Harrison is said to have practised on the nylon-string as a child, before developing a more serious interest in guitar at the age of 14 when he got hold of the Egmond, leaving the nylon-string in a cupboard.