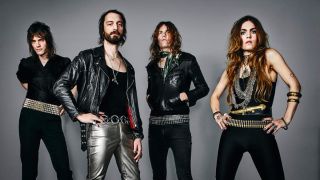 The band are now on their third album after 2012 debut Flash Point and 2014’s Shake Electric but after earning their touring stripes supporting everyone from Kvelertak and Uncle Acid & The Deadbeats to Graveyard and Metallica, their time is definitely now with the release of their fantastic album Killer Machine. ‘Shock And Awe’, ‘So Easy’ and the briliantly catchy ‘Dead Or Alive’ have a tasty ’70s hard rock vibe with a modern rock sound that makes them vital listening in 2018.

“I’m from the countryside and as a child I had one friend, and his bigger sister was the coolest person I’ve ever seen! This was in the mid-’80s and her room was full of posters with bands like The Runaways, Kiss, Blondie and Wasp.

"She also played the drums and had a nice Tama kit in their basement. It was like a nine piece kit, with very deep toms - I think it was an Artstar. I thought it looked awesome and I used to dream about playing on them. She would kill anyone who came near it, but I couldn’t stop thinking about that cool looking kit.

"One day, when she wasn’t around, I sneaked down to the basement and sat down behind the kit and just looked at it for like 10 minutes. I decided to defy my fear of my friend’s sister and began to search for the drumsticks. Then I felt a strong hand around my neck, dragging me off the drum stool.

"Luckily I got away, even though I peed my pants. But that didn’t matter because I was in love! Both with my friend’s sister and her drum kit!”

“When I first started I went to the public music school, a one-hour drive from where we lived. The lesson was 20 minutes short and we mostly practised drum notes on a practice pad. It was SO BORING!

"The last five minutes I got to sit behind a kit and play a pattern, and that was it. I wanted to quit after two weeks but my father pushed me to keep playing and practise. He bought me a kit and was very encouraging. Both my parents were my heroes - and still are! If it wasn’t for them I’d never be in a band today.

"I have a few other drum heroes as well: Jonna Karlsson from Night Viper, Dave Lombardo and Iron Maiden’s Clive Burr.”

Which Spiders song perfectly captures your sound and style?

“‘Burn Away’ has a punky feeling to it, which I love playing. I steal a lot from other drummers (mostly Peter Criss). Killer Machine is my own poor version of how Criss would’ve played it if he was in Spiders!”

“I’m very proud of Killer Machine! How we managed to put everything together despite everything we went through during the recording period. It made us stronger, both individually and as a group. Ain’t nothing can stop us now!”

“My first kit was a five-piece Wesper I got when I was like 12. The finish was very psychedelic I remember! Unfortunately I threw the drum kit over the balcony one day, because I couldn’t nail ‘Red Red Wine’ by UB40… I actually still having trouble nailing it, haha!”

What gear are you using now?

"The whole kit sounds incredibly good I think. I got a tip from the drummer in Weird Al Yankovic’s band to use Remo Emperor Coateds on the concert toms and it sounds really warm, fat and deep! The whole album is recorded with those drums.

"My favourite snare is a 1981 Tama Mastercraft Artwood Superstar snare. I have a variety of cymbals from Paiste, Meinl and undefined brands.”