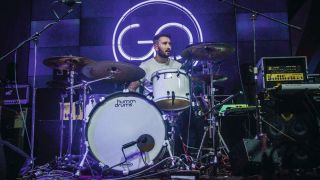 Many great things have come out of Rugby. Like rugby. And the jet engine. But now you can add to this Warwickshire melodic metal outfit Go Primitive.

The band’s catchy, riffy, squealy guitar rock bridges metal, modern rock and classic rock as drummer Dan Teale lays down the heavy foundations behind such hook-laden beasts as Hold Tight, I Want More and A Different Person, with the kind of groove and power which his 70s drum heroes would certainly approve.

“For as long as I can remember I tapped rhythms on everything, I drove my parents insane! I would make drums out of boxes, or pots and pans using chopsticks. That was before I was really introduced properly to a drumset. It was my early teens when I was first introduced to a kit by my step dad, who was a drummer himself in the ’70s. We used to watch old tapes of Deep Purple, Chris Rea, Toto etc. I fell in love with drumming watching those old tapes and as soon as I sat behind a kit, I knew that’s what I wanted to do!”

“Ian Paice, Jeff Porcaro, Thomas Lang, and of course our manager Jamie Nicholls of Fort Hope (he paid me to say that, haha).”

Which Go Primitive song perfectly captures your sound and style?

“When I Drive as it has a simple driving groove with fills that complement the track without over-playing. I’m all about a solid foundation for the song to play off. Groove and simplicity!”

“Playing at Glastonbury Festival 2016, we were featured on BBC2 red button coverage of the festival live on TV, that was pretty special!”

“I have my own signature custom drum kit from a small company called Humm Drums, they made like five drum kits and are no longer going. It is a matte white four-piece kit that sounds incredible! Cymbals, I use all Zildjian: 14" K Custom Hybrid hats, 19" A Custom

How do you approach playing live?

“Both really. Our singer usually comes in with guitar riffs, I then tear his riffs apart, to his annoyance, as I think of grooves. I then play a key role in the band’s writing and structure of a song. I usually help with writing bass lines to match the groove and feel I have in mind for a particular riff too. I’m all about how it feels so I try to let it come naturally.”

“My 21" A Custom Projection Ride. I’ve had that thing for about 12 years! The only cymbal not to break on me, touch wood, it rides and crashes so well. Love it!”

What have you got coming up that you’re most excited about?

“The release of Go Primitive’s debut album Choices. We’ve all worked so hard on this album, putting blood sweat and tears into it and we can’t wait for people to hear it. Now we have a very strong team behind us we are so excited for what 2018 will bring us.”

“One hundred percent energy and tightness. We pride ourselves on our live performance. We’ve put so many hours into these songs, we want the listener to go away having felt like they’ve seen a show, not just a band playing some music.”