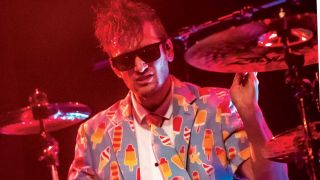 “I never get to nerd out over drums so this is extra special to me,” beams Arejay Hale a few minutes into his interview.

Arejay’s enthusiasm during our 30-minute chat is matched only by his larger-than-life persona displayed onstage with his band, Halestorm.

Now firmly established as one of the most exciting rock bands of the last decade, Halestorm have built a solid reputation as an unmissable live act, and much of that comes down to Arejay’s electrifying turns behind the kit.

So, when we were granted an audience with him, we wanted to explore the roots of his eye-popping style, his gear choices and drumming heroes.

“The first actual, real drum kit that I owned was this little Sunlite kit. It was like a ‘my first drumset’ kind of brand and my parents got me that kit from a flea market.

“I had a little toy drum kit that I stole from my sister before that when I was two years old. I’ve been playing since then and luckily my parents were very supportive and saw that it was a good way for me to get all of my energy out.”

Did you have a dream drum kit in mind in those early days?

“Not really in those early days. I just always loved rhythm and music and making music. I just thought music was fun.

“A lot of people do that when they’re young and then they grew out of it – I never grew out of it, I’m still that crazy kid. As I got older I became more serious about it and I started jamming and writing songs with my sister.

“My parents showed me videos of The Who, The Beatles and Led Zeppelin. They really wanted me to watch clips of Keith Moon and I loved that. I saw a lot of the old drum kits and I loved Ludwigs.

“For a while I played Ludwig but as the touring progressed I started leaning more towards Pearl. I like drum kits that have a classic, soulful feel.

“I don’t want drum kits that just look like they were made for the sake of being sold. I gravitate to the kits that were used by the drummers that I grew up watching.”

Has it been a constant evolution with you in terms of kits and set-ups?

“Yeah! I often look at videos of the set-ups that I’ve had down the years and I have done a lot of experimenting. If I have the same set-up for too long then I get bored. I want to experiment with different sounds.

“When I was really young, around 10 years old when I started this band, our music was a little more experimental so I wanted a lot of sounds and I evolved as an artist and I wanted to try different approaches.

“For a while I wanted a very basic set-up and then I’ve gone back and forth between a lot and a little. Today, I feel like my set-up has a nice balance of simplicity so it doesn’t feel overwhelming but it has enough to be interesting.

“I still have a nice amount of weird sounds to grab the listener by the ear.”

Do you have a tuning routine?

“I love the Reference series kits with the maple shells and the inner plies of birch and mahogany. I like them because I’m not very technical but I have tech’ed for myself for years and did the best I could.

“Having the layers of mahogany in there help the drums sound bigger than they actually are. I’ve played the toms as concert toms as well and they sound massive and so punchy that way.”

Who were the biggest influences on your playing style when you started out?

“Growing up I always wanted to be a power player. The guys that I loved as a kid, they hit hard. I wanted to hit hard as well. That could have been a pride thing. If you’re a drummer that hits hard, you get more respect.

“Those guys encouraged me and made me want to be a hard hitter. It’s amazing that guys like Bonham were such hard hitters with the gear they had back then. You watch videos of those guys and you can see the gear moving all over the stage and they don’t care!”

What is the piece of gear that you can’t live without?

“A cowbell! I always have a cowbell on my left side above my hi-hat. I honestly don’t know what it is about it. Maybe it comes back to my love of Bonham.

“I’ve played LP cowbells for a long time and they are amazing. We take a cowbell with us everywhere we go in the world.”

“Wow, I’ve never been asked that. That’s a tough question. I guess my biggest strength is that I put my heart into my playing.

“No matter what it is, whether it’s drumming, singing, songwriting, I have to love it and put my heart into it otherwise it feels like I’m doing my taxes.

“That’s a personality trait and some people might see it as a weakness, but if you come to a Halestorm show you can expect a lot of spontaneity. I can’t play a song straight like it is on the record from front to back, I always want to add something to keep it lively.

“We play a lot of shows and we’re on the road 10 months out of the year, so I do that to help keep my sanity. People look out for drum moments when they come to our shows.

“Doing that saves you a lot of money on production – we have those musical moments so we don’t need all of the pyro! We definitely don’t rely on backing tracks, we don’t even use a click track live.”