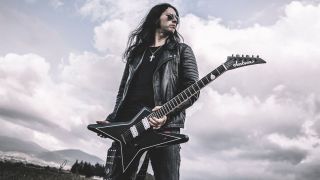 On the day it was announced Gus G’s partnership with Ozzy Osbourne had drawn to a close, with veteran axeman Zakk Wylde returning to the fold for the final farewell tour, the Greek guitarist responded to the news with the kind of dignity and grace that reveals much about the man behind the music.

“As a fan, it’s great to see Ozzy and Zakk back together… it’s been long overdue,” he commented. “To Ozzy and Sharon – thanks for everything – love ya!”

It may have certainly been an emotional day for the shredder, but his professionalism remained intact thanks to the sheer gratitude he had for having been chosen in the first place. Getting plucked from the European club circuit and thrown head-first into the world’s biggest arenas, believes Gus, is not something that happens to your average guitar player…

“Who wouldn’t be honoured to have been part of that band?” he asks a year on, sat in a swanky hotel bar facing Hyde Park.

“What are you gonna do – cry about it and say it was unfair? People need to stop acting like the world owes them, when really nobody owes you shit and nobody gives a shit! Once you realise that, life becomes a lot simpler and a lot nicer.

“Instead, be grateful for whatever comes your way. I think people around me were more upset than I was about not being in Ozzy’s band… but how amazing was it to have even happened? We made a record and played hundreds of gigs together! At the end of the day, it’s not my band - it’s his band…”

The guitarist points to Judas Priest axeman Richie Faulkner, who joined the NWOBHM titans 2011, as another musician who found himself catapulted into the big league while keeping his feet firmly on the ground. It’s something that for many musicians is easy to lose sight of…

“Look at how Richie Faulkner approached the Priest gig,” continues Gus. “He’s shown nothing but loyalty for the legacy of that band. He’s flying the flag rather than thinking, ‘I’m gonna play Painkiller my way!’ If you get too comfortable and start thinking you own this shit, that’s where it ends. Never take it for granted. Since Ozzy, I’ve been focusing on Firewind and my solo stuff. I can’t be fired from my own band – that’s partly why I started my own empire, haha!”

The latest addition to the empire comes in the form of this year’s third solo album Fearless – and truth be told, the title perfectly matches the nature of the guitar playing heard on its 10 tracks. More classic rock-influenced than the symphonic power metal of Firewind, the new release also boasts a cover of Dire Straits hit Money For Nothing with amps on full pelt…

“It’s exactly the same tempo, just played at half speed and transposed onto the low E string, as the main riff was played on the D and G originally,” reveals the virtuoso. “I thought it was weird I hadn’t heard any cool versions of that song because it’s such a classic. When it came out, everyone wanted to learn how to play it – people still do – and that’s what makes an iconic riff.”

This time round the guitarist mainly stuck to his signature equipment. The new Jackson models unveiled last year were fed through his ever-faithful 200-Watt Blackstar head and cab – dialling the Infinite Shape Feature control slightly towards the American-voiced left side…

“My sound is pretty dry; there tends not to be much going on in terms of effects – so I tend to stick my Blackstar on the Fire channel and that’s a lot of my sound right there,” he reveals.

“That amp was used for all my leads and rhythms, though I added a smaller 15-watt lunchbox head for some of the riffs. As well as my new Jacksons, I also used a Charvel Pro Mod with a maple neck. They’re closely related companies, so I got sent a few to check out and ended up recording with one…”

There’s also one song that features one of the newest additions to Gus’ guitar collection in the unlikely form of a Gary Moore 1961 Strat reissue, produced as a limited run by the Fender Custom Shop in Fiesta Red.

1. Understand more about what you are trying to convey

“All techniques need to have a musical meaning – that’s where some of the mindless shredding out there puts me off.

“Every guitarist wishes their technique was better; we all do. But it’s all about context, and it has to make a musical statement. If that statement is ‘I’m playing super-fast for 30 seconds’ and it’s what the song calls for, that’s a statement and it has meaning. A whole album of it, maybe not…

An in-depth guitar lesson with the man himself

“You need to think about melody and a theme. The perfect solo starts somewhere and takes you somewhere else. That’s why Michael Schenker, Uli Jon Roth or the guitarists in Iron Maiden are always saying something. And the same goes for Malmsteen – he’s the king of harmonic minor… but he can also do Hendrix like nobody else! Even while playing classical, Yngwie has a rock ’n’ roll attitude – he’s very clean, but he can also be real dirty.

“Who you listen to is how the seeds are planted in your brain. I wanted to combine all of my favourite players into one. Eventually you will get your own bag of licks, just like Malmsteen and Iommi have theirs. If you keep at it, years later, you open that bag of licks and voila – there you go!”

2. Record yourself as much as possible

“You need to pay attention to the little details – the vibrato, where each note ends and the next one starts or how the notes are divided across the beat. The best way to know is keep recording yourself - in real-time, you might think you sound fucking cool. Then you listen back and look at the waveform, the snare is here and you’re all the way over somewhere else.

“You realise how un-tight you are and where you need to get in better shape. I’m not saying everyone should be mechanical and on the grid, but understanding your own timing will just make you a better player and help you get to where you feel you need to be.”

3. Think about how to cross strings

“Crossing strings is the problem every lead guitar player has. There is no other way to learn than get practising. The Paul Gilbert lick from his Intense Rock DVD – three notes on one string followed by a note on the next string – is really helpful, but only if you persist with it. There will be a turning point where you feel you’ve reached your limit and you can’t get any faster, and then suddenly it creeps and you get there.

“I’d say Paul Gilbert has a really good way of giving you information. He delivers everything in a fun way, so I’ve lost count of how many hours I’ve spent watching that stuff. It was through his instructional material that I learned to practise on the clean channel and also know how to control the distortion when you add it in. Everything changes with gain; you get all these crackling noises, so it’s a balance of both. But never hide behind the gain!

“There was no day I sat down and thought, ‘Fuck yeah, I’m the shaolin of shred!’ I don’t think you ever really get to that point. But over the last few years I’ve felt more comfortable with my knowledge, what I’m playing and the control of it all. I’ve loosened up!”

4. Think about what will make each note different

“Dynamics is a big part of it as well – you should be thinking how loud you will pick each note and how will you accent it. Obviously with fast sextuplets, there are certain accent on different beats – you need to figure it out with a metronome and start slow. It’s boring and cliché, but there really is no other way.

“Recently I’ve been wondering if I use too many three-note-per-string or two-note-per-string ideas, so I started getting into quintuplets. It sounds and feels different, and I started making licks around that rhythmic concept – which meant I had to learn how to do some economy picking, as I’m more of an alternate guy.

“As a result, I’ve gotten a bit lazier with my picking – I’ve started using less alternate! A lot of the leads on the new album follow economy patterns - you can hear it on the closing licks of Letting Go. We all play in boxes; every guitar player has his or her comfort zone. Every now and then you need to step out of that, fuck up and I guess that’s how you come out with new things. You always need a new box somewhere else…”

5. Do all that is asked of you

“I never really looked at myself as a session guy – I never really wanted to be one. That’s the funny part: I ended up playing guitar in several big bands, but my childhood dream was always to have my own band and get it to a certain level. After the first Firewind album, I was a co-founder of Dream Evil, Mystic Prophecy and Nightrage…

“Once word got out about my playing, I got the call from Arch Enemy and that was when when I realised I didn’t want to be a session guy. So I made a choice of only doing my own band… and of course a few years later, Ozzy calls and you just don’t say no to that!

“If I take a gig, I’m well aware of what my position is and what my place is. I have good manners, I think – that’s one of the key things to keeping a gig. Be a nice guy, show up on time, play your heart out and be happy with where you are. Whatever you do, don’t be a miserable cunt, because nobody wants to hang around with one on tour!”

Fearless is out now via AFM Records.