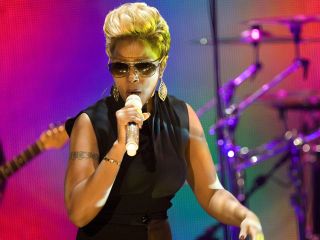 Blige wants to give you every inch of her...oh, nevermind (Image credit: John Ewing ./Retna Ltd./Corbis)

Led Zeppelin's Stairway To Heaven and Whole Lotta Love have gotten makeovers, courtesy of R&B singer Mary J Blige. The only question is: Why?

Both cover versions are available on the UK release of Blige's new CD Stronger With Each Tear (they don't appear on the US package), which again begs the question: Why?

"What people don't know about me is I've been a rock 'roll' fan for years," Blige told the Los Angeles Times after nailing her 17th vocal take of Stairway. "I loved soft rock as a child. I'm full of this stuff, naturally."

At press time, MusicRadar didn't have the credits of musicians used on the RedOne-produced Whole Lotta Love, but it does feature a most strident, Euro-sounding drum machine instead of an actual player. (What's that sound we hear? Oh...it's John Bonham turning over in his grave!)

Interestingly, this past week, blues-rock guitarist Joe Bonamassa, no stranger to cover tunes, said Stairway To Heaven was a song he wouldn't even go near. "There's nothing I could add to it," he told MusicRadar.

So what do you think? Check out the clips below and let us know: Are Blige's tunes Zep-worthy?