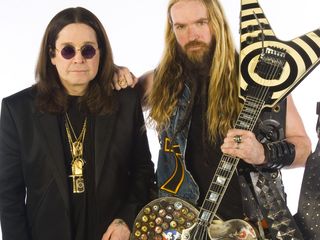 Zakk Wylde has spoken to Oregon's 101.5 KFLY radio station about his involvement with Ozzy Osbourne. And it's not exactly happy reading.

Osbourne suggested in June that he was "getting a new guitar player". Wylde's wife later Tweeted that all was "OK" with Osbourne, but Wylde himself pulls no punches.

Wylde told 101.5 KFLY: "The boss (Ozzy) hasn't even given me a phone call, so I mean… I'm just like… I don't know what's going on over there. Are we doing this thing or are we not doing it? When I keep getting asked these questions, I go, 'Call the boss. When he tells you, then he can call me back.' I mean, it's just like… I love you, man. Whatever you want, that's cool.

"You finished with me? Cool"

"We're working on the new record, we'll be back in September, we'll work on finishing the record. And then we're supposed to do the tour. I mean, it's like, dude, you don't wanna play with me anymore? Fine. Play with whoever the hell you wanna play with. I couldn't give a rat's ass. Like I'm gonna get all jealous or whatever. But you know what?! Man up and give me a phone call and tell me what the hell's going on. You finished with me? Cool.

"I mean, it's just like… Everything's sounding like Black Label? [Referring to Ozzy's claim in a recent interview that his solo albums were beginning to sound like Black Label Society due to Wylde's involvement with both projects]

"I guess everything sounded like Black Label when I first started with you, when I was 19. It was still the same guy; I don't know what you're talking about."