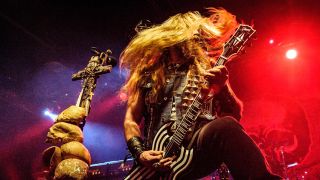 Next March, the Experience Hendrix Tour will return with a star-studded roster that includes Billy Cox, Buddy Guy, Eric Johnson, Kenny Wayne Shepherd, Bootsy Collins and Dweezil Zappa, among others. Joining what will be eighth edition of the tour is Black Label Society leader Zakk Wylde. While the former Ozzy Osbourne guitarist says that he jumped at the offer, he also admits that he's a little surprised that he'd never been asked to take part in the "experience" till now.

"Hey, I named one of my sons Hendrix - you'd think that would help," he says, chuckling. "If they were to ask, 'Do you have any qualifications?' I could've said, 'Yeah. Does a son count?'" He lets out a hearty laugh, and then adds, "No, but seriously, I'm totally honored to be part of it, just because of my love for Jimi Hendrix, for one. But then you look at all the insane guitar players who are on the tour - you know it's gonna be awesome. I'm a huge fan of everybody involved."

Taking a break from his work on the next Black Label Society album, Wylde sat down with MusicRadar to talk a little Hendrix.

Are you already writing up a wish list of Hendrix songs you'd like to play on the tour?

"I know a ton of 'em. I mean, you don't start thinking, 'I'll do Foxey Lady, Fire, Purple Haze' - you hear those on the radio all the time. There's a bunch of other ones that would be cool to do. I'm already going through my collection, even my vinyl. I'm shifting through it and trying to think of some deeper tracks; I might try a few things out and see how they fit. Some things I could rework a little and Black Label-ize them, or I might stay totally true to the originals - hard to tell right now.

"I gotta start thinking about what I'm gonna play pretty soon. Right now, I'm knee-deep in writing lyrics for my own tunes. I've been sitting out in the truck having a couple Valhalla Javas and racking my brains for words. We recorded 16 new tunes, so I need lyrics, melodies - shit's gotta get done."

You and I have talked about a lot of guitar players over the years, but never Hendrix.

"Yeah, that's funny. My guitar teacher, LeRoy Wright, was a huge Hendrix guy, so he turned me on to Jimi. As a kid, I was coming more from Black Sabbath and stuff like that - that's what I was into at first. I dug Hendrix, and I totally got that he's the messiah; he's the Jesus Christ of the electric guitar. One of the first tunes LeRoy showed me was Hey Joe, and that was C, G, D, A and then E major. Eventually, he taught me the little lick in the beginning, which I couldn't get at first. I was happy right off with playing the chords. [Laughs]

"Through Hendrix, I discovered guys like Robin Trower and Frank Marino. It's interesting, though: I'll hear Stevie Ray Vaughan play the blues, or when I go and listen to Hendrix... It's blues licks, but the way they twist them and bend them and interpret them changes everything. It's like they're making a new recipe from this thing called the blues. If you were cooking chicken, depending on which spices and sauces you used, you'd be like, 'Wow, that tastes like Frank Marino,' or 'That takes like Robin Trower, and that takes like Stevie Ray Vaughan.'

"Jimi didn't start the whole thing - he got it from Buddy Miles and BB King and all the blues guys that he dug - but he put his own spin on it. A pretty serious spin. [Laughs] It's amazing how you can tell these guys apart, though. You can't tell everybody apart, but the guys I mentioned, and especially Hendrix, of course, you can pick them out from everybody else. Hendrix you can pick out from a mile away. His sound, his execution - he was about as unique as it gets."

Because Jimi sought out a lot of new sounds, I think a lot a people merely think of the psychedelic side to him - Purple Haze and what not. But if you strip all the trappings away, you're left with a very authentic blues guitarist.

"Oh, without a doubt. It's all blues and pentatonic scales, which is the blues. His chord voicings were always slammin', too. I love the way he'd roll off and do arpeggios on those barred chords. As soon as you do that, it automatically sounds like Hendrix; whether you're doing it on an acoustic, an electric, a Strat, a Tele, a Les Paul - you could do it on a ukulele and it could sound like Hendrix." [Laughs]

He could straddle two different worlds like nobody else. It's always been interesting to me how he could sound so earthy and pure, but at the same time he seemed to come from outer space.

"Totally. I think Jimmy Page said something like, 'Hendrix took the blues into outer space,' so there you go. He was talking about how Zeppelin was blues, Cream was blues, but Hendrix took it to the moon and beyond. He stretched things everywhere he could, even as far as him jammin'. Listen to Voodoo Child, Hear My Train A Comin', Machine Gun, which is beyond insane - but it's jammin'. Hendrix's whole thing was always, 'Let's jam. Let's see where this thing can go. We're gonna stretch it.'"

Did listening to Hendrix ever make you want to investigate Strats more? You're obviously a Les Paul guy and have been for years.

"No, you know, I own some Strats, and I love all guitars. I'm a Les Paul Custom guy, for sure, and you know, that's kind of the beautiful thing about guitars: You have your Strat and your Tele guys, your Les Paul guys, and that's part of their thing. Slash is a Les Paul Standard guy, whereas I love my Customs. But Hendrix's tone with the single-coils and the Strat? That's the sound; that's his thing. He could be very versatile with it, too."

His sound wasn't thin. It could sound like an eruption.

"Without a doubt. And, you know, when he first came out, all that stuff was brand new. Between the Marshall stacks and all the effects pedals, he was using stuff that hadn't been around. But he loved experimenting with everything; if there was a new piece of gear, he wanted to try it out. A lot of his recordings you hear him using stuff before anybody else could get their hands on it."

Do you have a particular favorite Hendrix album?

"Obviously, the Band Of Gypsys thing, as a guitar player I'm gonna love that one. Just the sheer improv/jammin' nature of the record is pretty incredible. It's got Machine Gun on it, which is one of the best improvised electric guitar moments of all time. We all know how sick that is.

"It's funny: I remember playing my dad the Star-Spangled Banner on the Woodstock album. My dad was like, 'Wow, that's all coming out of one guy?' I told him, 'Yeah, Dad, that's Jimi Hendrix. He's, like, the greatest guitar player ever.' He dug it, and that was cool because my dad was a big Sinatra guy."

Well, it's great that he didn't think what Jimi did was sacrilege.

"No, he didn't think it was sacrilege. And he was a World War II vet, D-Day at Omaha Beach, the whole nine yards."

There are a couple of returning artists to the tour - Kenny Wayne Shepherd, Eric Johnson, Johnny Lang. Anybody you're really looking forward to sharing the stage with?

"All of 'em. Like I said, I'm a fan of all the guys on the tour. Eric Gales is phenomenal, everybody's great. I'm just excited to get out there and hang around the whole thing. Just watching them play and jammin' with them - it's gonna be insane. Every one of them, dude. Father Johnson, he's the man."