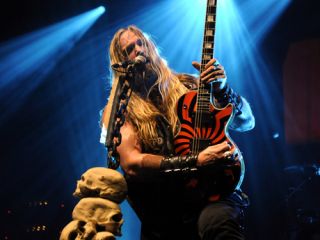 This is what they mean by 'skullduggery.' Zakk Wylde on stage with Black Label Society, 2010. © Gene Ambo ./Retna Ltd./Corbis

"Probably all of my favorite bands did mellow stuff from time to time," says Black Label Society main man Zakk Wylde. "Zeppelin did all kinds of of acoustic songs. Almost everything on Zeppelin III was acoustic. And when I was with Ozzy, we did Mama, I'm Coming Home - people thought we were crazy at the time, like we were going all soft. Hey, don't get me wrong, I still love to slam it. But I can't rock out all day long. I'd go out of my mind!"

And so, Wylde and the rest of Black Label Society decided to explore the softer side of a handful of tunes from the band's Order Of The Black album by recording 'unplugged' and, in some cases, 'semi-unplugged' versions on the just-released The Song Remains Not The Same. (Darkest Days gets not one but two reworkings - on the first Wylde sings lead, while on the second he duets with country superstar John Rich.)

Although Wylde stresses that The Song Remains Not The Same isn't an 'official' album ("we just wanted to put something cool out there"), he's quick to point that it's not a throwaway, either. "If anything, it gave me a chance to stretch out and do some covers of songs I've always loved," he says. "You want to hear me do Simon & Garfunkel and Crosby, Stills, Nash & Young? Here's the record for you." Wylde even turns in a haunting version of Black Sabbath's Junior's Eyes, which is bound to turn the heads of heavy metal fans everywhere. "I always dug that song," says Wylde. "It has a special vibe, and I think I took it somewhere different."

MusicRadar caught up with Wylde the other day to talk about The Song Remains Not The Same. The guitarist, still reveling in his recent appearance on American Idol, during which he backed up contestant James Durban on Sammy Hagar's Heavy Metal, was preparing for a lengthy BLS tour. "My life is non-stop, man," he says. "We've got band rehearsals firing up later tonight, so I've got a million fuckin' things to deal with till then. In other words, a normal day for me."

First off, I love the title The Song Remains Not The Same.

"Yeah, it's pretty cool. We were sitting there while we were recording it, havin' a good time, and I think somebody said something about Zeppelin's The Song Remains The Same. Of course, we all love and worship that record. I mean, who doesn't? All of a sudden, the whole thing hit me - The Song Remains Not The Same. I said, 'Dude, that's it. Not only is it a great title, but it totally fits what we're doing.'

"It all worked because we were recording these new versions of songs from the Order Of The Black album, unplugged and acoustic versions, acoustic-electric versions - really, the only track that's an unplugged version is Overlord because it has the same riff. It reminds me of when Clapton did that unplugged version of Layla. It was pretty different, but when you listen to it closely, it's basically the same riff.

"So I said to everybody, 'Let's do something like that on some of these things.' Like Riders Of The Damned, it's not even the same melody; I just used the lyric. It's almost a different song. To me, that really fed into the whole title of The Song Remains Not The Same. What we're doing here is not the same, even if you think you know the songs."

At first I thought you were playing everything yourself - the overall mood is very intimate.

I was going to mention your piano playing. Pretty impressive, Zakk.

[laughs] "Well, after my appearance on American Idol, what can I say? I exude so much! Anything that I can do that can be a gift to the world, I'll gladly give it."

I hear you. What kind of piano are you playing on the record?

"I've got this deal with Gibson, so I have a Baldwin. I also have a Kawai, which is one of the first pianos I ever bought once I got some money - thing sounds awesome. Then I have a Korg keyboard, too."

Let's talk about some of the tracks. Even though you call Overlord an 'unplugged' version, as you said, it does feature electric guitar. It reminds me of what Alice In Chains did on Jar Of Flies and Sap.

"Oh, totally. Those were amazing records, man. Killer stuff. Yeah, I guess you could say Overlord is a Jar Of Flies kind of thing - I remember on that album, you've got the drums, and Jerry Cantrell's playing electric guitar. Yeah, it's got the same mix, definitely."

On a couple of these tracks, like Parade Of The Dead, there's some marvelous string arrangements.

"Thank you, brother. Yeah, that's me, because being the idol that I am, I now have that capability. [laughs] That's me on the Korg. It's got killer string sounds, so all you have to do is think up what you want to hear, and you're there, man. I guess they actually recorded some dude playing a cello and sampled it, but what you hear on this record is me. I'm doing the actual keyboard playing."

"Thanks. I wish I could take credit for it. Actually, all the singing you hear is done by Sarah McLachlan's brother. [laughs] He had to sign a confidentiality contract, of course. You know how these things these work."

I do. And I also know you've blown the agreement.

[laughs] "Oh! Well, the truth is out. No, thanks, man. What can I say? My singing, it's got Jon Bon written all over it, you know what I mean? The mighty Jon Bon cannot be defeated. It's a mighty cowboy force. He's still wanted dead or alive." [laughs]

OK, I'm curious about some of your choices for covers, such as Black Sabbath's Junior's Eyes.

"With me and covers, you know, I'm always going to go for the classic stuff. Of course, we all love Sabbath - I mean, who doesn't? - so I was just jammin' on the piano, and before you knew it, I was singing and playing Junior's Eyes. I got a piano vamp thing going, and I started singing Ozzy's melody."

Have you played it for Ozzy?

"Yeah, I sent it to him last Father's Day. He was like [imitates Osbourne] 'Oh, Zakk, it sounds killer, man. It reminds me of a gospel tune.' No, Ozzy totally loved the Sabbath cover."

You also do a great version of Helpless, which was originally recorded by Crosby, Stills Nash & Young. I guess it's more of a Neil Young tune, though.

I'm especially knocked out by your take on Bridge Over Troubled Water.

"See, the whole thing with me was, if I'm going to cover a song, it's gotta be something truly great. How are you gonna top that one? You can't. You just do your thing. It's a song I've always loved."

In the case of Bridge Over Troubled Water, the original is so revered - were you nervous about doing your own version of it?

"I'm more or less worried that Paul Simon is going to jump me in a back alley and bludgeon me if he's not happy with what I did to his song. [laughs] I heard he's highly trained in Jeet Kune Do. You don't want to mess with Paul. And Art Garfunkel, forget about it! Word is he's a formidable pro in the art of Monkey Claw, which is another deadly form of Kung Fu. This could get pretty nasty, man, I'm tellin' ya!" [laughs]

Talk to me about working with John Rich on Darkest Days.

"We were both doing a tribute to Les Paul at the Ryman Auditorium in Nashville. I ran into him, and he said, 'Zakk, we should do something together.' I said to him, 'John, that'd be great, but between you making records and touring all over, and me doing everything with Black Label - not to mention splitting the atom and folding our laundry and everything else we do - when are we going to find the time?

"But he was serious, so we got it together. The guy's killer. I did the track, got it to him, he did his part, knocked it out of the park. I dig it. He brought another feel to it that's pretty cool. Great guy."

I imagine you must feel pretty happy with how the whole set turned out.

"Dude, I'm so happy with it, I can't stop looking at myself in the mirror! [laughs] No, it's cool. If you want something mellow, a break from the slammin' stuff, this is a great record to vibe out to, sit back, drift away, you know? Meanwhile, I've got some touring to do - we'll be out for a while - and after that we'll get back to doing another Black Label record. But I might do an 'Un-Blackened' DVD next, something with strings and a bunch of friends like Father Cantrell, Slash, all my buddies. If I can tear myself away from the mirror, I'll get to everything." [laughs]