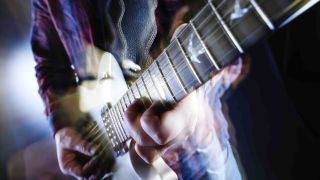 Do your digits hold the key to great tone? (Image credit: Joby Sessions/Future)

It's the age-old adage that guitarists just can't help bringing up at every opportunity: tone is in the fingers. But is it really?

Over generations, we've heard the same old line, but is the tone-finger argument just a defence mechanism for a lack of gear knowledge? Or can the right player really make anything sound good?

And, for that matter, do the rules carry across different genres? The greatest of metal soloists can be let down by a waspy high-gain tone, yet acoustic players sat in front of a decent condenser mic will usually sound decent enough - provided their technique stacks up, of course.

We asked you, dear MusicRadar users, to tell us your thoughts, and very well-considered words they were, too - here's what you had to say…

Your answers: is guitar tone in the fingers?

"I would argue that fundamentally both are huge contributors. But I think that technique is more important. Sure, you can mask bad technique with plenty of the right effects, but if you have a good enough ear even then it will ring on through.

"However, I would also argue that gear is highly important. A good guitar has a rich and beautiful tone, but in the wrong hands will still sound like turd. Sound sculpting through effects and the right choice of guitar and amp too are very important.

"Take The Edge for example (I know he is a controversial topic as a guitarist for his simplicity). He is a master of tone through his sound sculpting with gear, but with all that delay, if he produced poor tone with his fingers it would ring on endlessly.

"I think both are very important but I must say that finger technique reigns above all else."

"This is more of a general guitar opinion, but I think there needs to be a clear distinction of style and tone. If you gave Adam Jones from Tool a Tele in standard tuning and a Blues Junior Combo then recorded an audio clip of him playing, I don't think I would have any shot at guessing it was him.

And whilst style and tone are completely different, they do directly influence each other. My playing completely changes if you take away my Ibanez RG and give me a Strat, simply because you gave me a different tone to work with.

"Overall, though, I think the gear vs technique argument is different for every guitarist. Some are defined by their gear more than their technique and vice versa; neither is a bad thing, after all."

"I don't think 'tone' is. You can't make a Fender sound like a Marshall with your fingers. Your 'sound' probably is, though."

"Context is everything. Playing a Boss Power Driver through a Gorilla combo on a Dream Theater song may sound terrible, but it could sound fantastic on a Birthday Party song.

"Tone is neither in the equipment or the fingers, but where that tone is placed."

"Tone is not in the fingers; if you got Jimi Hendrix to play an open C on exactly the same gear as John Petrucci it would sound the same.

"Yes. Good guitarists can sound good on shit gear; this is purely down to superior technique and clean playing."

"Basically, you have to use fingers to turn knobs or settings of your gear, so that's why they always say 'tone is in the fingers', lol."

"No. I haven't heard someone turn a Fender Twin into a fire-breathing gain monster using their fingers! That said, applying your own technique, individual nuances and general individuality onto whatever gear you happen to be playing will generate a different outcome to someone else using the same stuff… unless you both play in a similar way."

"After a gig, two young guys, who had been watching me avidly all night, approached and asked, 'How come your Fender Telecaster sounds so good?' When I showed them that it was just a cheap (£50) and nasty Jedson (Japanese) Tele copy, one of the guys thumped his mate on the shoulder and said, 'You've got a REAL one, and it doesn't sound anywhere near as good!' Made my night.

"I'd say the fingers have it in this case."

"Nuno Bettencourt once said that when they were supporting Van Halen, he was like a giddy schoolgirl when Eddie said he could play HIS guitar through HIS rig! Nuno said it was the most disappointing moment of his life cos he played through that rig… and sounded just like Nuno. PROOF it's all in the fingers. Of course a shitty amp is never going to help but YOU GOTTA BE YOU!"

"Heart and soul as manifested through fingers/technique. That can be amplified/enhanced by gear. If it's not present, though, gear can do little. Or, in other words, the human is the artist, the gear provides the tools of craft - they're not the same thing."

"I've heard plenty of great artists sound great with crap guitars, but I've never heard a crap player sound good with great equipment. It will always be what, how and implement what you know. The guitar itself is just a tool; the real magic comes from the artist."

"False dichotomy: they're inseparable. Billy Gibbons's sound *is* his technique married to the right gear. Can't have one without the other."

"I remember seeing Cheap Trick the last time they played in London. Rick Nielsen must have played 50 different guitars that evening, everything from Strats through Les Pauls to Gretches (including umpteen custom Hamers), and his playing style and personal tone shone through."

"'...but is the tone-finger argument just a defence mechanism for a lack of gear knowledge?' I would rather like to state the exact opposite: so many string players spend so much time and money on investing in and learning lots of effects, but they forget that if you don't stand steady on a good 'naked' tone, you're gonna suck anyway, and it's something that so many electric guitar players seem to scoff at only to hide behind lots of effects instead.

"As someone who has always primarily played acoustic strings (but also lots of electric), I don't even think it's even up for discussion whether tone is in your fingers or not, because it's pretty clear that it is when you sit with an acoustic guitar (or mostly mandolin, in my case).

"In fact, it is in both of your hands, but mostly in the picking hand. Your fret hand does play a role, because of things like applying subtle vibratos and such, but the picking hand is the core of a good tone, no matter what you think, and how many compressors, overdrives and reverbs you have.

"Everything in the picking hand matters, and the picking hand matters for everything: how hard you hold the pick, at what angle you hold it, striking speed (and even the speed at which you leave the just-stricken string), how much give you apply in your grip at any moment when the pick touches the string. This is really not an opinion, it's facts.

"So to sum up: YES, your fingers matter like hell for a good tone, and thus also overall sound, because when you can make even the shittiest $50 electric guitar sound fair enough even completely unplugged, that is when you can make magic with your effects!"

"Guitar sound is a chain starting from fingers, going through various elements (strings, wood, pickup, cables, effects, amps…) and ending in the loudspeakers. Like every chain, its value is given by the weakest point.

"If the fingers are weak, the sound will be weak. This is why guys like Satch, Gilmour or Blackmore will sound better than the average dude playing on the same gear!"

"Another demand in making an absolute where there is none. They are not mutually exclusive of each other. Of course, technique is the essence in beginning, and the two combined is a synergistic wonder."

"A combination - better gear does no harm, but the best players will be recognisable on the cheapest gear! Case in point:"