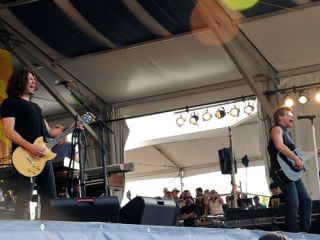 Gigs don't come much bigger than a Bon Jovi world tour, and Yamaha Guitars are justifiably proud that acclaimed LA sessioneer Phil X has chosen a couple of Yamaha SGs as his go-to axes while he fills in for Richie Sambora.

"For almost three decades, Bon Jovi have earned their reputation on the road as ambassadors of American rock 'n' roll, performing for more than 34 million fans around the globe. Along the way, the New Jersey-based quartet have racked up a stellar resume of career highlights and accomplishments. Not least being named as the worlds highest grossing touring band of 2010!

"They have now become the latest high-profile rock band to adopt the new Yamaha SG1800 series Guitars as they continue their huge worldwide tour in support of their latest Greatest Hits release. Due to illness regular guitarist Richie Sambora is replaced by the one and only Phil X the top LA session ace and Yamaha guitar endorsee.

"Phil is a prolific session guitarist, having played on albums by Avril Lavigne, Kelly Clarkson, Rob Zombie, Chris Daughtry, Alice Cooper and Bon Jovi, to name but a few. He is also known from LA-based turbo pop band Powder, his current own band The Drills and his almost 'cult status' YouTube Fretted Americana guitar demo videos, currently at nearly 8 million views and counting.

"For these Bon Jovi shows Phil is playing his Yamaha SG1820 and SG1802 guitars, as Yamaha's Marrk Kirkland comments: 'We are very proud to support Phil on the current Bon Jovi tour and with all his other numerous projects, he is a great player and a great guy into the bargain. The new Yamaha SG1800 range is very quickly becoming the guitar of choice by a lot of world class players who are now looking for something a little different, a guitar that not only sounds great but makes them stand out from the crowd.'"