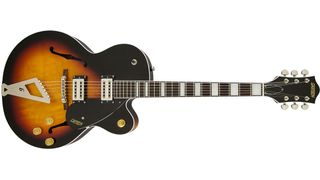 This Gretsch G2420 Streamliner could be yours!

Gretsch really impressed us with the Streamliner semis it launched this year by packing head-turning quality and tone into svelte, affordable package. Our very own Dave Burrluck has embarked on an odyssey of customising his Streamliner into a hot-rod mod machine, but they sound and play great straight out of the box. Now you, too, can be in with a chance to own one of these great guitars, as the good folks at Gretsch have kindly ponied up a single-cut G2420 Streamliner in aged Brooklyn Burst to give to the lucky winner of this month's competition.

But first, the vital statistics. The G2420 model has two Broad'Tron humbucking pickups that evoke all the classic Gretsch tones of yesteryear, but remain so usable for modern rock, blues and pop, while the cool of the 50s jazz era is evoked by the oh-so-retro Gretsch chromatic tailpiece and vintage-style gold control knobs. Under the bonnet, parallel tone bars reinforce the laminated maple top helping to keep feedback at bay when you're rocking hard, while the 22-fret neck is of pleasantly playable nato construction.

To enter the competition to win this hellacious slice of Gretsch tone simply visit our online competition page and answer the question below correctly:

In which American state was Gretsch legend Chet Atkins born?