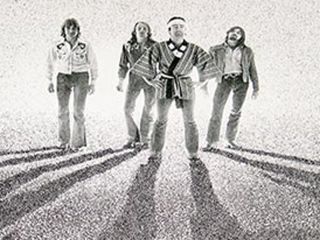 Everybody else is getting back together, so why not Bad Company? Why not indeed, thinks singer Paul Rodgers. And he's doing something about it too, reuniting with his Feel Like Makin' Love a one-off show on Aug. 8 at the Seminole Hard Rock & Casino in Hollywood, Florida. It will be the group's first performance since a 1999 reunion tour.

According to Billboard.com, frontman Paul Rodgers has two reasons for revisiting his past. On the one hand, "it'll be great to see the guys and play and go back down that road again just for one night."

But there's business to be done as well. Already there have been plans for at least one bogus Bad Company to tour, and Rodgers is trying to put an end to it. "What I'm doing is protecting the legacy that we have built. I can't really go into that because it's kind of in the hands of our lawyers at the moment. But there are a lot of things that make it necessary to reinforce our rights here.

He continues, "By doing this one-night stand with Bad Company, we will be cementing our right to the trademark 'Bad Company' for touring, and anyone who attempts to challenge us and tour misuing our trademark and mislead the fans will be liable to legal action."

For the one-off show, Rodgers will be joined by original Bad Company guitarist Mick Ralphs and drummer Simon Kirke, who continued the group with other singers after Rodgers left in 1982. Lynn Sorenson from Rodgers's solo band will take the place of late bassist Boz Burrell, who died in 2006.

The show will be dedicated to the memory of Steve Weiss, the longtime attorney for Bad Company, Led Zeppelin and Swan Song Records, who passed away last week in Florida. It will also be recorded for a DVD that will accompany a Bad Company compilation expected out later this year.

Of the show's repertoire, Rodgers says that it should be "pure Bad Company and nothing else. We're gonna dig into the catalog a little bit. There are some great songs there I'd like to revisit, like Simple Man, and of course the favorites, too."

Fans hoping for an ongoing commitment to Bad Company can keep on hoping, though, as Rodgers expects to jump back to his involvement with Queen + Paul Rodgers, which is working on final mixes for a studio album, tentatively titled The Cosmos Rocks and due out this fall. The group will start a world tour in September in Europe, and it recently previewed a new track, C-lebrity, on British TV.

"We're in great shape, actually," Rodgers says of his album with Queen. "I think it touches a lot of emotions. Every song is different from every other song, but I do think there is a very powerful emotional content in every song. I'm a great believer in variety in music, and so are the other guys."