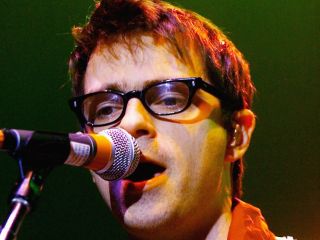 According to CNN, Cuomo's bus was on the New York State Thruway around 40 miles west of Albany en route from Toronto, Ontario, to Boston, Massachusetts for a show scheduled for today at the Agganis Arena at Boston University.

The bus driver reported that, after a light snowstorm, the rear of the vehicle slipped on ice, ran into several reflective road posts and jumped a guardrail, ultimately landing in a ditch.

Cuomo was brought to St Mary's Hospital in Amsterdam, New York, complaining of rib pain, along with his assistant, Sarah Kim. The singer's wife, Kyoko, their two-year-old daughter, and a fifth passenger were also riding on the bus but were uninjured.

Weezer's Boston show has been cancelled, along with two other concerts, 9 December in Washington DC and 10 December in Camden, New Jersey. The status of other dates is unknown at this time.