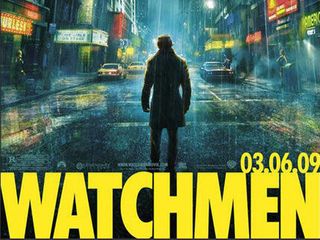 One might assume that Tyler Bates, the musician/producer who scored the hotly anticipated Watchmen movie, is a super-obsessive comic book/graphic novel aficionado.

Not so, says Bates. In an interview with Rolling Stone, the Los Angeles-based composer admits, "To be honest with you, I'm not a real comic geek. The first time I read [Watchmen] was just understanding when to look at the pictures and then read the bubbles."

Nonetheless, Bates dove into the story's alternate reality of the '80s and provided a score that is heavy on vintage synths (think Jan Hammer, only heavier). "Some moments cried out to be supported with more of an '80s vibe,"says Bates. "But it's still a contemporized expression of that. I'm not trying to recreate it, it's the essence."

Bates says he also drew heavily on the influence of bands such as Gang Of Four, Joy Division, along with classic metal-era Metallica and Slayer.

While Bates may be a newbie to the resurgent Watchmen phenomenon, a majority of the bands on the film's soundtrack were huge fans of Alan Moore's original graphic novel, including My Chemical Romance, who jumped at the chance to cover Bob Dylan's Desolation Row for the end credits.

Check out this video in which the band discuss their enthusiasm for Watchmen. There's also a behind-the-scenes look at their video shoot, along with performance footage. Fun stuff!

Come back to MusicRadar later today for our Who Listens To The Watchmen? feature, detailing not only the film's superb soundtrack but the songs that should've made it into the film.