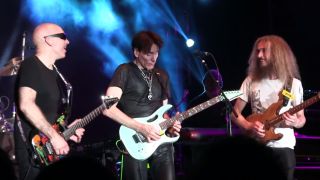 G3 has had its fair share of killer line-ups over the years, but the addition of Guthrie Govan has really shaken up the setlist, as fan footage of the holy trinity of Joe Satriani, Steve Vai and Guthrie reveals.

Taken on the band's recent European tour, the clips show the guitar heroes jam on Jimi Hendrix's Little Wing, The Police's Message In A Bottle and, surprisingly, Nirvana classic, Smells Like Teen Spirit, before segueing into Neil Young anthem Rockin' In The Free World.

Watch the videos below, and let us know what you think.

Message In A Bottle