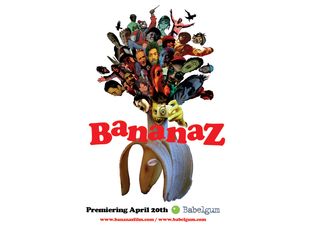 Your all-access pass into the world of Gorillaz.

A new film that documents the birth and development of Gorillaz, the virtual band created by Damon Albarn and Jamie Hewlett, can now be viewed online for free.

Film maker Ceri Levy was a part of the Gorillaz universe from 2000 to 2006, gathering behind-the-scenes footage to create the feature-length Gorillaz Go Bananaz, which premiered on Babelgum on 20 April.

The film promises to reveal details of Albarn and Hewlett's working relationship, and features fleeting appearances from the likes of Dennis Hopper, De la Soul, Dangermouse and Dan the Automator.

So, break out the popcorn and click here to watch the 91-minute film, or check out the trailer below if you want a taste of what it has to offer.

Bananaz will be released on DVD on 1 June, while Gorillaz are currently at work on their third album.