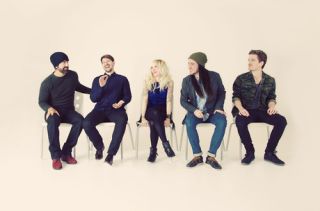 ACOUSTIC EXPO 2013: Canadian rockers Walk Off The Earth have received over seven million views on YouTube, building their huge fanbase independently of record labels or management. Who better then to ask for advice on improving your chances of getting seen?

As guitarist Ryan Marshall told us, getting noticed comes down to what songs you choose to cover, making them your own, and how much effort you're willing to invest in making your songs and music videos the best they can be with what cash and equipment you have.

In this quick-fire interview, Marshall talks a little about the process behind how Walk Off The Earth choose which songs to cover, before sharing his tips for getting noticed on YouTube.

What criteria do you use when choosing a song to cover, and what is your process of working out an acoustic arrangement of a song?

"It has to be a good song! Every song is different, so there's no particular formula or process. It's just about making it your own. Try to change the song without actually changing it. That's what we do."

What is your favourite song to cover on acoustic and why?

"The first song I learned on acoustic guitar was Needle and The Damage Done by Neil Young. It's still my favourite to play."

When did you first get the idea of covering other people's songs on YouTube as a way to draw attention to your own material?

"It was never really planned out like that. The idea was to find a way to reach a lot of fans without having to drive across Canada in a stinky van for months at a time!"

What advice do you have for musicians looking to gain a following on YouTube and help their videos stand out from the crowd?

"I think any form of social media is great for bands that don't have the ability to get content onto commercial formats. We live in a time where music is no longer just listening, it's seeing too. When people listen to music on the radio it's two-dimensional. YouTube has created a three-dimensional world of music and has spoiled the fans to a point where just listening is almost boring. A music video can't be just a band performing any more. It has to be more; it has to grab you in the first 15 seconds and keep your attention all the way through. Just make your video better than any video you have ever seen, and make your next one better than that!"

Walk Off The Earth covering Somebody That I Used To Know

Here's the band not only covering Goyte's smash hit, but playing it all together on one guitar. So far the low budget video has earned them over 153 million views!