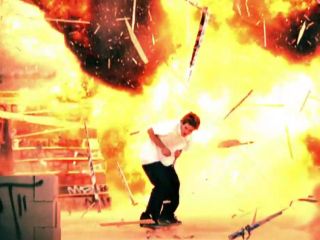 For 17 years now, director Spike Jonze has been to music videos what Richard Lester (A Hard Day's Night, Help) was to '60s rock 'n' roll cinema: a pioneer.

Having co-directed (with Ty Evans) the acclaimed skateboarding film Fully Flaired which utilized the ethereal track Heaven by the British electronica duo UNKLE, Jonze recently re-edited footage from the movie to produce a stand-alone music video for the band's song.

The results are, quite simply, explosive.

The Lakai skateboarding team's sills are considerable, but with Spike Jonze putting the boarders through their paces - bursting through walls, 'switch-flipping' down staircases that disintegrate from blasts of napalm - all without the benefit of CGI, their dangerous feats are both poetic and shocking.

Check out the clip below. A hypnotic song is given a visual treatment that will soon be considered a classic.