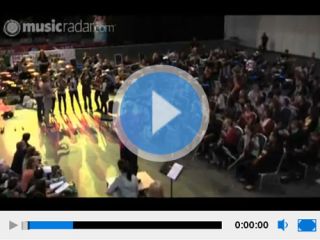 The BiG GiG: believe it or not, it sounded great!

Friday at LIMS 2009 saw the biggest concert of the entire show: Music For Youth's The BiG GiG. The event featured hundreds of young musicians, who hooked up to form a rock orchestra of epic proportions.

Amplification in the form of Laney AH50 and RBs was supplied by Headstock Distribution and ensured the gig was a loud affair.

However, far from being a cacophony (as MusicRadar, it's sad to say, was often fear if over a hundred children get together to do, well... anything), the sound was awesome - as documented in the video below.

So a big pat on the back to Music For Youth (and the performers, of course) for pulling the whole thing off. Next year, though, we want it even bigger!