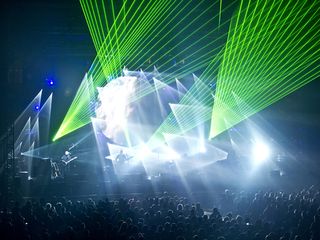 What kinds of instruments and gear do you need to be part of The Australian Pink Floyd Show? We found out. © WOJCIECH PACEWICZ/epa/Corbis

You can't see the real Pink Floyd anymore, but you've still got the next best thing: The Australian Pink Floyd Show. Since 1988, the large-scale tribute band has toured the world with an act that recreates the look, spirit and the sound of later-period Floyd with uncanny accuracy.

Since forming in 1988 in Adelaide, South Australia, The Australian Pink Floyd Show, which includes original members Steve Mac (guitar, vocals), Colin Wilson (bass, vocals) and Jason Sawford (keyboards), in addition to half a dozen other musicians and backup singers, have set themselves apart from every other Pink Floyd tribute act. Their use of lasers, videos and other stage elements is a large part of their success, but it's their incomparable musicianship that truly resonates with audiences.

And you can count the real-life David Gilmour as a fan: In 1994, he attended an Australian Pink Floyd Show. Suitably impressed, he invited the band to attend the Division Bell tour after-show party at the Earls Court Exhibition Center in London. A couple of years later, he asked the group to perform at his 50th birthday celebration. "A huge honor," says Steve Mac. "We not only had David's blessing, but he played my guitar on stage. That all proved to me that we were doing something right."

MusicRadar caught up with Mac, Wilson and Sawford, along with drummer Paul Bonney (who joined in 1998) at the Tower Theater in Philadelpha, PA for a pre-soundcheck tour of their essential instruments and gear. "It's taken us a while to get everything just right," says Mac. "But I think it's all where it needs to be. If we can take you right into the Pink Floyd experience, then we're doing our jobs."

Mac plays the solo to Time (below), but you'll swear it's David Gilmour.

Wait till you hear what this bass sounds like!