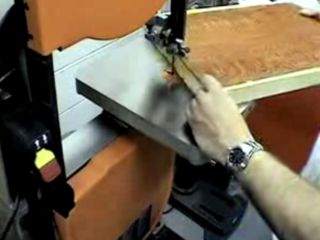 This only looks like a hunk of wood. Soon it'll be fire-breathing dragon guitar!

Ever dream of building your own electric guitar? Being the Brian May on your block? So have we. It being a weekend and all, we thought, Hey, why not head down to basement and whack up a kick-ass six string? How hard can it be, right?

Before busting out all of our tools (question: do nunchucks count as 'tools'?), we first decided to check out YouTube and bone up on some instructional videos. And whaddaya know? They have just the thing: How To Build An Electric Guitar, Parts 1, 2 and 3.

The videos are produced by Perry Novak, who builds Guit Wild Guitars. We've admit, we've never heard of Guit Wild, but Perry must know what he's doing. After all, he's made not one, not two but three videos. That says something. That says, "I have a friend with a video camera and a lot of time on his hands."

More than that, it says, "I know so much about building guitars that I need three videos to show you everything I know." Chances are, good ol' Perry can teach us a thing or two. (Or three.)

For a wicked-looking dragon guitar, Perry recommends using Australian lacewood. Hmmm, we don't seem to have any of that around anywhere. Old pieces of plywood with nails sticking out of them - that we have. Already we're getting a sinking feeling that this isn't going to work out.

Perry cuts the wood with a band saw into two equal-sized pieces. Geez, we don't have a band saw either. Nor do we have a surface plainer. But wait - the guy down the street has...what is that thing he has again? He's got all kinds of weird stuff. God only knows what he does with it.

Now Perry's using something called an 'oscillating spindle sander.' Do they sell those at Home Depot? And how about a router table? Man, how much freakin' gear do we have to buy here? Well, at least we have a regular file (OK, it's really an emery board), which Perry uses once he has his body assembled. Oh, and a blow dryer for drying the paint...Does it matter if ours won't work on the 'high' setting?

We're getting bleary eyed. Perry has way too many fancy tools and gadgets. Plus, he really knows his stuff. Guy must've gotten an A+ in shop class. (Random thought: Guitar Center's having an end-of-October sale, aren't they?)

Part 3 - making and installing the bridge

We give up. This is much too difficult. Perry's obviously devoted years to his craft. Why would we think we could build a guitar over the weekend when we can't even get all the laundry done?

But wait...what's this?...Perry's dragon guitar shoots fire from the headstock. Too cool! Alright, that changes everything. Now we're sold. We're going to give it a shot. Wish us luck. Lots of it. And hope we can find our first aid kit, too.

Of course, should we fail (a strong possibility), there's always our recommended retailers.