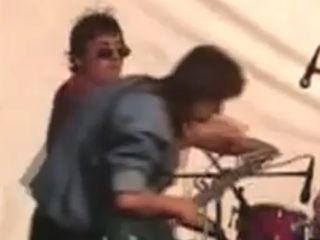 'You messed up my big chance. POW!'

At MusicRadar, we try to keep up on all things weird and wacky...especially when it comes to bizarre music-based videos. But even a few choice clips slip by us from time to time. Thanks to our friends at Guitar World, we can now bring you the above piece of YouTube cinema: a guitarist getting smacked on stage for screwing up.

We're not sure if the poor axeman was a hired gun or a defacto member of this Russian group, but one thing is for certain: he had no idea what song the band was playing, although he gamely gave it his best...or something close to it.

Nonetheless, his efforts didn't need the standards of his impulsive lead singer, who saw to it to give the guitarist a bitchslap at the conclusion of the number (it's at the 48-second mark). And right afterward, the bassist even moves in to follow suit, but stops short of real violence.

Granted, the guitarist's playing was less then stellar, but do you think he deserved a public smackdown, or should the singer have taken things up with him backstage?