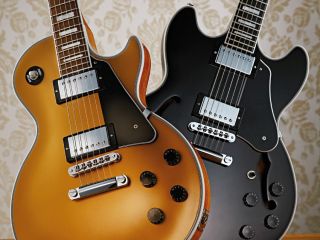 At first glance you might think that the guitars we have here are just another Gibson Les Paul and ES-335, but that's really not the case.

Imagine the Les Paul Classic Custom as a grown-up Les Paulwith a few nifty tweaks to make it look flashier than a Standard yet actually more affordable, and things start to look rather interesting. Gibson states that 'grade A' woods are used throughout, with the traditional carved maple cap on a 'weight relieved' mahogany body and a glued-in mahogany neck.

Where things differ from the norm is in the use of a fingerboard of baked maple, which Gibson states is "a heat-treated hardwood that offers a clear tone and extreme durability", and which lends an unusual new look to the guitar.

Meanwhile, the thought of a Gibson semi with no arched top at first seemed rather at odds with the ES range's heritage. Yet the new-model Midtown Custom's smaller body size renders this irrelevant. Our ebony version looks great too - very stark with only the chrome hardware and white/black binding as contrast.

Check out both guitars in our video in which Mick Taylor puts the instruments through their paces.