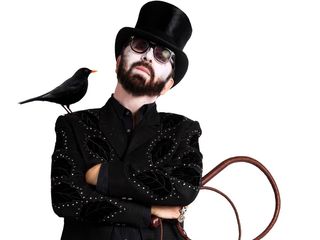 Dave Stewart documents a 10-day burst of creativity in his new film, The Ringmaster General

Dave Stewart has a unique perspective on the 10 days he spent in Nashville in 2010, a whirlwind period that yielded not one, but two albums (2011's The Blackbird Diaries and the upcoming The Ringmaster General, due out 4 September). "I came to town and became sort of infectious," he says.

Hearing his own words, he chuckles, then says, "The whole experience I had in Nashville was amazing for me, ending up doing duets with Alison Kraus and working with all kinds of artists. People would pop into the studio and say, 'What's going on in there?' and they'd wind up singing backing vocals. It became a music party. So I became infectious, and now I'm hoping to be more of a virus."

Stewart hadn't planned on recording in Nashville; in fact, he wasn't even supposed to be there. Stranded in London due to the clouds of ash caused by the eruption of Iceland's Eyjafjallajökull volcano and unable to catch a flight home to Los Angeles, he wandered into a vintage guitar shop and purchased an old acoustic once owned by the country and western star Red River Dave. The next day, a flight opened up - with a change-over in Nashville. Stewart, by now embued with the spirit of Red River Dave, hightailed it to Music City.

Once there, an adventure unfolded, with Stewart setting up shop at John and Martina McBride's Blackbird Studios and freewheeling his way through 10 days of sessions that included a core group of the town's A-list players. Stewart literally wrote and recorded songs on the spot, aided by a diverse assortment of artists, including Stevie Nicks, Alison Krauss, Martina McBride, Colbie Caillat, Orianthi, Joss Stone, The Secret Sisters, Jessie Baylin and Diane Birch.

Both albums fuse country, rock, blues, bluegrass and R&B, and the results are quirky, soul-stirring and thoroughly engrossing. For a fascinating (and sometimes surreal) inside look at the proceedings, there's the new documentary, The Ringmaster General, premiering next week (Wednesday, 22 August) at the Belcourt Theatre in Nashville. The film mixes real-life moments with staged re-creations of situations that amount to a breezy, intriguing and wildly entertaining portrait of a career artist who isn't afraid to close his eyes and roll the dice. And if a vodka martini is involved, so much the better.

You can watch an exclusive video preview of The Ringmaster General above. In the following interview, Stewart talks about the what it's like to watch himself on film, whether he'll record again in Nashville and why that town's Hermitage Hotel is a great place to hang one's hat (it involves coconut water and 60 bottles of wine).

During the making of these two albums, what did you discover about yourself as a musician?

"I always knew that I was very spontaneous, and things came quickly to me. But I think I was a bit lazy as a guitar player and didn't try to push myself. I didn't put myself out there like, 'Hey, I'm a guitar player.' But when I started playing with those guys in Nashville, it was a nice kind of jolt, because that's what they do. It's all they do.

"They didn't know what to expect from me, but the minute we started playing, it was like, 'Oh, right. This is what he does.' You can see it in the documentary, at the end of the first day. We played three or four songs, kind of rock-blues guitar stuff. I think they might have been wondering, 'What's he doing to do? Is he going to do some sort of electro thing?'"

Similarly, after the fact, what did you learn about yourself in watching the documentary? Was it strange to see yourself going through the process on film?

"It was, yeah. It was interesting - it's kind of like a mirror. Some of it was happening in real time, and some of it was kind of staged, but it was mimicking the truth of what really happened in my life. My manager was saying, 'What's going on? What's he up to now?' And my wife was like, 'Where is he? He's supposed to be here.' [laughs] It was more my business manager who was freaking out: 'What the hell? He never told me he was going to Nashville. I'm getting all of these bills from Blackbird Studios!' That sort of thing.

"But that's exactly how I am. It was interesting having it unfold before my eyes. I am very driven, and I'm also very… eccentric. But there's a total love for the creative process and seeing something through to the end. Watching the movie, I can see my own mind working. I'm kind of making the movie in my head as I'm living it."

Stewart at Blackbird Studios, pushing up the faders on Beast Called Fame.

Did the spirit of Red River Dave stay with you throughout the sessions? I was fascinated at how you bought the guitar in England that belonged to him and you found all of these items of his in the case.

"Oh yeah, Red River Dave. That was such a weird thing. I think I said this in the movie, that I like to go down side roads. If I'm in Jamaica, I'm never in a tourist spot; I'm usually in an odd, off-the-beaten-path place. The Red River Dave guitar, I saw it on the wall. It was kind of an odd shape, and I was like, 'Let me play that one.' So I played it and it sounded great, so I bought it.

"When I got back to my hotel, I started reading all these things. Then I started listening to these scratchy MP3s - I got sort of protective and nostalgia for this time in history. When I say 'nostalgic,' obviously I had never been where he was, but it reminded me of my hometown of Sunderland. We all learned folk songs to get into the folk clubs. I was learning Dylan songs and blues, but I learned loads of old English and Scottish folk songs, which were very similar to country songs - songs about real people and fisherman, you know what I mean?

"I got this emotional, nostalgic feeling, and then when I got to Nashville and met all of these characters, particularly the guys in my band, I had a funny feeling that took me back to my early days, the camaraderie, everybody swapping songs and stories and that sort of thing. And what was nice was, the Nashville guys were fascinated by me because, growing up, they were listening to The Beatles and the Stones, The Kinks and The Jam, The Clash - and, of course, I knew that stuff by heart. It was a great swapping of tales and songs."

There's footage of you going into the Ernest Tubb Record Shop, which is such a cool store. Did you pick up any special items there?

"Yeah, yeah. I picked up these whole vinyl collections of various singer-songwriters, mainly early stuff. A lot of folks I didn't know much about. So many great storytelling records. Obviously, there were a lot of Johnny Cash rarities. There was this weird movie that Johnny Cash was in that was dubbed in German. He must've tried to bury it. He plays this crazy guy who keeps a woman hostage while he robs a bank. It's called Five Minutes To Live. Have you ever seen it?"

No, I'm going to have to seek that one out.

"It's weird, it's got guns and it's real scary. It's like Clockwork Orange or something. It was before its time in a strange, American way. So yeah, I scoured the store out."

Laying down a guitar and vocal track at Blackbird.

There's a great scene where you're in the bath at the Hermitage Hotel, and the front desk calls up to say they're working on the dozen bottles of coconut water you requested. What did they think of you there?

"I think they realized I'm pretty eccentric. [laughs] They would see all of these people come in to go up to my room - Martina McBride, Jessie Baylin. They got the picture: 'He's an artist. He's got a lot of different things going on.' They were very sweet. Last time I left, I asked, 'Can I store 60 bottles of Ringmaster General wine in the cellar?' They were fine."

Having made two albums now in Nashville, would you consider going back to record?

"In fact, what I'm probably going to create is my own show. It'll have different artists on it with me and my band. I'll probably interview the artists who come on. I did something like this for HBO. I interviewed Bono and The Edge for three hours, and I interviewed Stevie Nicks. It should be interesting. I'm looking forward to getting that started.

"It's all part of what I like doing - experimenting with music. It's always worked well for myself or Mick Jagger or Tom Petty or anybody I've worked with. People like the fact that they can step outside their own skin for a minute and then step back in. It's like looking through the other end of the telescope."