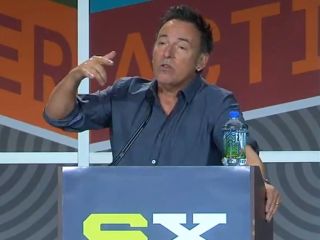 Ever wondered how many genres and sub-genres of metal there were? Bruce Springsteen knows. Delivering the keynote address at the SXSW music conference in Austin, Texas this week, The Boss rattled them off:

Stating that it was impossible to agree on anything musically, that "there is no unified theory of everything," Springsteen marveled at the history of contemporary music, and in a 51-minute speech that was blazingly personal, penetrating and frequently hilarious, he told the tale of his own artistic development in a way that made it possible for everybody to see a little of themselves in.

"These men and women, they were and remain my masters. By the time I reached my 20s, I'd spent a thousand nights employing their lessons in local clubs and bars honing my own skills."

As to what constitutes 'pure' music, Springsteen stressed that creativity remained supreme and knew no limits. "The elements you're using don't matter. It's not confined to guitars, tubes, turntables or microchips. There's no right way, no pure way of doing it - there's just doing it."

The art and importance of live performance was a central point of Springsteen's speech. Remembering how he was signed as a singer-songwriter, he said he was a "wolf in sheep's clothing... I had nights and nights of bar playing behind me to bring my songs home. Young musicians, learn how to bring it live, and then bring it night after night after night - your audience will remember you."