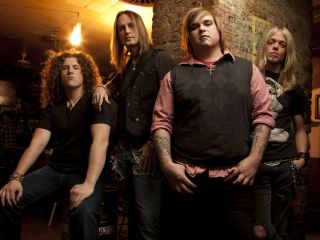 Our good friends over at Roadrunner Records UK have sent us the first in a series of online videos featuring Kentucky riff-mongers Black Stone Cherry. Watch the clip, filmed during last year's Carnival Of Madness tour, above, and read more details from Roadrunner below:

Black Stone Cherry are currently on a sold out tour of the UK and in anticipation of these live dates the band put together a series of webisodes.

The webisodes were filmed and edited by Dan Catullo who filmed Alter Bridge's recent live DVD from Wembley. The footage was shot on the Carnival Of Madness tour that the band were on with Alter Bridge and Theory Of A Deadman in the US, before all three made their way over to the UK at the end of last year.

Pick up a copy of Black Stone Cherry's latest album Between The Devil And The Deep Blue Sea now.