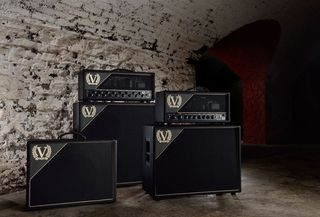 After months of speculation, MusicRadar can reveal exclusively that Victory Amplifiers will launch officially in the UK on 2 October 2013.

Designed by noted UK amp man Martin Kidd, there will initially be three all-valve models, all of which will use a "modern-boutique approach to design and specification, using meticulously hand-wired tag boards at the heart of the circuits." The company adds that its aim is "to create guitar amplifiers that inspire you ever onwards in your playing and never let you down."

The V10 The Baron is a single channel 1 x 12 combo, featuring one octal (eight-pin) and one noval (nine-pin) output valve, each with their own master volume controls. Standard fitment will be one 6L6 and one EL84. While rated 'only' at 10 watts, members of Guitarist magazine's editorial staff have reported that it'll be easily loud enough for small gigs, after playing the first production models. The V10 also features a series effects loop and valve-driven spring reverb. The launch SRP is £1,249.

The V50 The Earl is a two-channel, classic rock-orientated head featuring a pair of EL34 valves in the output section. Each channel has an additional boost function - essentially giving four modes - plus valve-driven spring reverb, a 15-watt power setting and a series effects loop. The SRP is £1,499.

The V100 The Duke 100-watt head is also two channels, with an additional boost function, essentially giving three modes. It uses four 6L6 valves in the power section, a decision arrived at while testing prototypes with Victory's first endorsee, Guthrie Govan: the British guitarist is currently using the V100 on tour. It also has dual-effects loops, a 30-watt power setting and dual, footswitchable master volumes. The SRP is £1,999.

Amps are currently in production according to the company - its website, launching 2 October www.victoryamps.com has more contact and dealer information.

Buy a print or digital copy of Guitarist here.