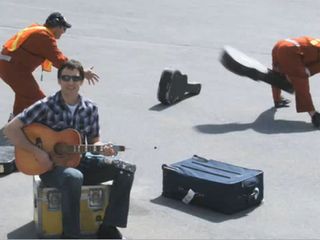 United Breaks Guitars is the name of a song and YouTube video that's received worldwide attention for singer-songwriter Dave Carroll and his band Sons Of Maxwell.

Already, the clip has been seen by over 3 million viewers, and Carroll's website has clocked over 50,000 visitors since the video premiered.

And to think it all started when Carroll was traveling to Nebraska with his band during a one-week tour, and his $3,500 Taylor guitar was severly damaged by airline baggage handlers in Chicago (the musician has witnesses).

Carroll attempted to get compensation from the airline to repair his busted Taylor, but he was rebuffed at every turn. Finally, after nine frustrating months, he told a United representative that he was going to write three songs about the situation and post videos for each on YouTube.

Now that United Breaks Guitars is a hit, Dave Carroll is getting a bit of love from the company. Last week, he spoke with a United rep who offered $1,200 to cover the repair, plus a matching amount in flight vouchers.

But Carroll has already cut the promised second song (about a certain customer service employee who proclaimed the matter "closed" last December), and the final number is being penned.

Carroll's experience has drawn this video response from Taylor Guitars spokesperson Bob Taylor, in which he expresses his enthusiasm and support for Carroll. At the same time, he offers guitar-toting travellers some handy tips.

Meanwhile, Carroll has released a video statement in which he tells United he's no longer interested in compensation (too little, too late, as the saying goes), and that they should instead donate the money to charity.

Guess you can do that when you're famous.