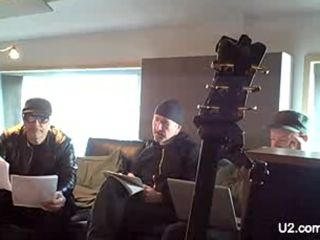 U2 in their current Dublin studio

Olympic Studios in Barnes, South West London, is one of Britain's most legendary recording studios. Artists including The Rolling Stones, Jimi Hendrix and Led Zeppelin have all recorded there, so there was some sadness when owners EMI announced in December 2008 that they would be closing the facility.

U2 were one of the last bands to work at Olympic before its planned closure, partly recording new album No Line On The Horizon there. Now, the Irish band are reportedly keen to buy the studio to save it from demise.

According to a U2 insider quoted by The Sun newspaper: "Bono, Edge and the rest of the band really enjoyed their time in Olympic.

"They knuckled down and really responded well to the place's atmosphere. They already have their own studios in Dublin but feel that Olympic could be a very wise investment.

"They're totting up some figures at the moment. If the maths works out there's every chance they'll put an offer in."

Olympic Studios has been used by Hendrix, The Stones, Led Zeppelin and U2.

U2's own plans to build a new studio in Dublin have recently hit trouble. Difficulties with finance mean the dockside project might be delayed by up to 12 months.

U2's No Line On The Horizon is due for release 2 March in Europe and 3 March in the US.