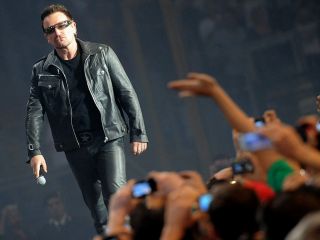 In a move that's bound to raise a few eyebrows - and one that even Bono admits could render his band "irrelevant" - U2 are working with Danger Mouse on a new album.

Speaking to The Age, Bono said: "We have about 12 songs with Danger Mouse. It's the album we'll likely put out next because it's just happening so easily."

But wait, it gets stranger still, for it also transpires that U2 are spending time in the studio with will.i.am, David Guetta and RedOne on a second, club-inspired album. Reflecting on these surprise collaborations, Bono explains: "We're experimenting to discover different sides to us. And I think we're at one of those moments. We're fighting for relevance. Being successful is a lot easier than being relevant."

That sounds like plenty for U2 to be getting on with, but there's even talk of a third album based on the songs that Bono and The Edge have written for the Spider-Man musical that's due to open on Broadway next month.

As for when this new material is likely to see the light of day, the first single from the Danger Mouse project is scheduled for December, with its parent album being lined-up for release early in 2011.