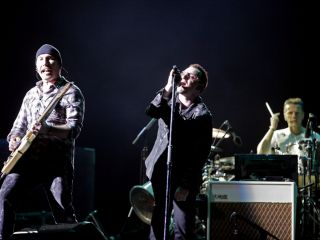 U2 want to be a Rock Band - video game-wise, that is (Image credit: Brian Hineline/Retna Ltd./Corbis)

Ever wondered what it would be like to be in U2? Well, you might never find out, but you could experience the next best thing quite soon - the Irish superstars have indicated they're interested in their own version of the popular Rock Band game series.

As is turns out, the idea isn't a new one: last year U2 were speaking with MTV Games and Electronic Arts to do a U2: Rock Band, but the the plan was ultimately deep-sixed.

"We definitely would like to be in there, but we felt some of the compromises weren't what we wanted," bassist Adam Clayton told USA Today. "That could change. I love the idea that that's where people are getting music, and we'd love to be in that world. We'll figure something out."

It isn't about the money

U2's 180 on the idea has nothing to do with money - the band recently bagged roughly $8 million for their 24 September Giants Stadium gig alone - but it has everything to do with the artistic success of The Beatles: Rock Band.

"What The Beatles have done, where the animation is much more representative of them, is what we're interested in, rather than the one-size-fits-all animation," Clayton said. "We didn't want to be caricatured."

While there might be certain similarities between the two games - The Beatles played the Apple rooftop in 1969, while U2 paid hommage to the Fab Four in their Where The Streets Have No Name video - at least with U2 we won't have imagined 'dreamscapes' of songs.

Will a Gibson Explorer controller, patterned after The Edge's iconic guitar, be part of a premium package? Too soon to tell.