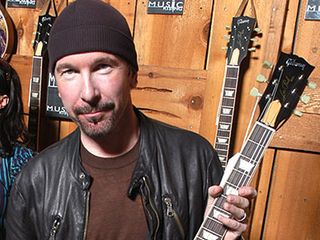 U2 will serve no music before its time

Signing a 12-year, mega-million-dollar deal with a concert promotion company might make most bands hurry things up a wee bit. But U2 guitarist The Edge says the band is just now shifting into second gear.

"We went into this project allowing ourselves the indulgence of making music without thinking about where it was going to end up," The Edge says. "We're starting to get serious now."

The band have been recording at their home studio in Dublin with longtime producer Brian Eno. The album, their 13th, was expected to be released in October 2008, but an engineering source in Dublin recently revealed that singer Bono has considered recording a double album, a move that would push the release date.