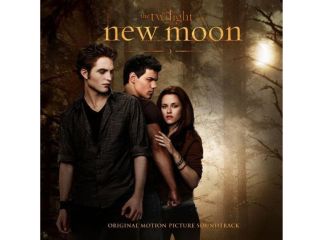 Twilight haters - that is, those who aren't tweens or moms obsessed by last year's high school vampire flick and Stephenie Meyer's book series - might have a hard time maintaining their ire with the release of the soundtrack to Twilight: New Moon, the sequel to that first film.

While the maiden CD featured some spot-on, slam-dunk tracks by Muse, Paramore and even an affecting Jeff Buckley-ish performance by film star and heartthrob-of-the-moment Robert Pattinson, it also offered generic, knotheaded rock courtesy of Linkin Park and Collective Soul.

The good news for the new disc is that the trimumvirate of author Meyer, director Chris Weitz and music supervisor Alexandra Patsavas have ditched the schlubs and have given us an alt rock sampler with a handful of devastatingly good songs.

The bad news is, some of the tracks are epic fails, in embarrassingly obvious ways.

1. Meet Me On The Equinox - Death Cab For Cutie

The darlings of Bellingham, Washington are on the verge of mainstream success, and they just might make it with this way-too-on-the-nose cut. Over a minor-key, arpeggiated riff and a syncopated snare drum, singer Benjamin Gibbard tries to emote about how "everything ends...everything ends." But he sounds like a bored Geddy Lee, without Lee's sublime quirkiness.

The biggest drawback, however, worse than a chorus that should surge but falls flat, is that the lyrics smack of work-for-hire-itis. There's no teeth, no hunger.

This trio from Southampton, England, have 'buzz band' written all over them, and they grab the brass ring with this deliciously wicked winner. A grimey, greasy guitar and bass riff is offset by a poppy tambourine, the perfect musical bed for Russell Mardsden's left-of-center vocals. Oh - and there's an axe solo that's positively nuclear.

Radiohead's 15 Step served as the end credits song on the first Twilight (the kind of number you sit through even if you don't care who the second unit's catering crew was), and now Thom Yorke has served up an absorbing original.

Over pulsating electronica, Yorke speaks/sings as if he's telecommunicating from another planet. It's less a song as it is a mood piece, but it's one that gently works its way into your soul. By turns soothing and unsettling, this is Yorke indulging his inner Pink Floyd, as he's done in the past, to wondrous effect.

When was the last time you heard a singer who made you feel as though you were experiencing music through brand-new ears? That's the power of Swedish chanteuse Lykke Li. This stark, piano-based hymn is spiritual stuff, and Li's arresting vocal powers will have you on your knees in worship.

From the let's-try-real-real-hard-to-write-a-vampire-movie-song files, we have this lugubrious letdown from a band normally known for stirring anthems. A wealth of musical ideas can be a true bounty if the segues sound natural; this is merely a hodgepodge, and singer Brandon Flowers can't make sense of the incongruity. A serviceable, all-too-brief guitar solo is, well, all too brief.

Marina's breathy, sex-kitten-sung songs have been featured on numerous TV shows, and perhaps they work as small-screen snippets. This number, a fingerpicked acoustic bedroom ballad, is pure schtick. Marina's child-like vocals are too mannered to be emotive, and she's too wrapped up in the idea of her own preciousness to realize she's not connecting.

You've gotta hand it to rock's newest kings of We Can Do Anything: they've taken an intriguing cut from their current album The Resistance and made it truly swing. By de-emphasizing the piano, pumping up the guitar and pushing the vocals front and center, a strong melody that was lacking in the original emerges.

Fans of The Resistance already know this as I Belong To You (+ Mon Coeur S'Ouvre A Ta Voix), and mainman Matthew Bellamy even sang some of that version in French. Here he parlez-vous's no francais, but his sentiments are just as romantic and urgent.

More spooky stuff, perfect for a late night and many glasses of Scotch. Over a muted folk track, played on guitar and banjo with a hint of orchestral touches, the multi-tracked vocals of Justin Vernon (Iver) and Annie Clark (St. Vincent) will have you wishing daylight never comes. Ethereal and haunting.

This LA trio straddle the fence, alternating between homespun, acoustic Americana and kick-out-the-jams electric rock 'n' roll. This is the former, a forlorn meditation that woulda/coulda been one of the best latter-day Johnny Cash songs ever. Laments don't usually uplift, but this one does so in strange and beautiful ways.

The least-known of the lot here, Hurricane Bells is a monker used by one-man band Steve Schiltz. As a singer and songwriter, he doesn't do anything extraordinarily new: this is perfectly acceptable lo-fi grunge. But his nutty, fuzzed-out guitar solos are trippy fun.

An LA five-piece led by Alex Brown Church, Sea Wolf have an uncanny way of sounding like the sweet, dreamy side of The Smiths without coming off as a bunch of rip-offs. The Violet Hour, underpinned by a slightly echoey, retro rockabilly beat, is a pleasant diversion - there's some zippy little guitar lines darting to and fro - but it's too lightweight to have any kind of meaningful impact.

Chicago's OK Go do some truly weird and wonderful things, like combining a gently strummed acoustic guitar, a sparse floor tom beat and some demented, psychedelic guitar soloing. The vocals are sugary but not saccharine - and then, right when you least expect it, the band blast into roof-raising rock. OK Go - right to this track!

Pastoral acoustic pop than evolves into a wall of electronica - it's audio absinthe, and you might be seeing things after it's over. The thick, lush layers of GB vocals are joined by that of Victoria Legrand of the duo Beach House, and the result is hypnotic.

Birmingham's Editors have changed directions over the years, veering from the minimalist indie rock of Murmur-era REM to a darker but no less ambiguous electronic sound. Here they play it relatively straight: aside from tasteful, atmospheric synths, this is a piano-and-voice number, and when that voice belongs to Tom Smith, he of booming baritone, you're going to pay attention - he commands it.

OK, so it's not indie rock. But as film score, this bewitching piano melody written and performed by noted French composer Alexandre Desplat, is an exquisite digestif.