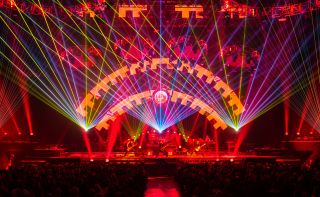 They've played to over 10 million people since they formed, and now Trans Siberian Orchestra are so massive they need two different line-ups in the US to meet demand. But this January the band are bringing their rock opera and huge production to the UK for two rare dates.

Formed in 1993 by producer, composer and lyricist Paul O'Neill, TSO are one of the most successful Stateside touring acts of the last ten years and the 30-piece ensemble has featured a number of excellent guitarists in its ranks including Testament's Alex Skolnick, plus current members; Savatage man Chris Caffery and former Megadeth shredder Al Pitrelli (pictured below).

The band performed to one million people last year in the US alone and will play 100 dates on their annual winter run (including two shows per day) in the States before heading to Europe in January for the following UK dates:

Tickets are available to buy online from Ticketmaster here.

Ahead of the tour, the Trans-Siberian Orchestra will release a compilation album on November 18 called Tales Of Winter: Selections From The TSO Rock Operas.

Look out for an interview with Al Pitreii in TG soon.