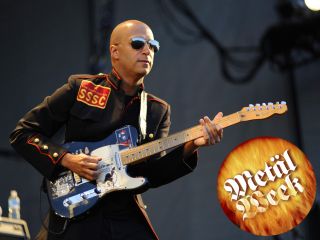 Iron Man 2, the sequel to 2008's superhero blockbuster and the second in a planned trilogy, is ready for global domination. With Robert Downey Jr reprising his role of Tony Stark and returning director Jon Favreau steering the thrill-ride actioner, expect boffo box office (that's industry talk) in the weeks and months to come.

Befitting its title, heavy metal drives Iron Man 2's score and soundtrack album. Not only are 15 - count 'em, 15 - AC/DC hits featured throughout, but Tom Morello, superstar guitarist for Rage Against The Machine who also doubles as The Nightwatchman and leads Street Sweeper Social Club, piles on generous helpings of molten rock goodness.

This is the second time Morello has lent his shred services to the Iron Man franchise: He worked with the first film's composer Rami Djawadi and, in the guitarist words, "brought some heaviness where it was appropriate." (Morello also had a brief cameo in that picture.) And now the Rage man is back, laying down "big fat rock" in and around composer John Debney's impressive score.

MusicRadar sat down with Morello to talk about what he calls his "side job that feels like playtime." The affable, thoughtful axe man admitted that the prospect of cranking it to 11 in future movies is appealing (he already has another project in the can), but he emphasized that he would probably focus "more on the music side of things than acting. As a thespian, my skills are probably best appreciated in small, don't-blink-or-you'll-miss-him doses."

Seems like you've established a neat second career for yourself in working with Jon Favreau.

"Yes, well, we've been friends for some time. As you may know, I was an actor in the first Iron Man - I played a terrorist and had the rare distinction of being the first person killed in that film. It was fun. I had a cool outfit and a nice hairdo. Jon's great. I love being involved in his projects. He's super-talented in so many different ways."

Speaking of acting in Jon's movies, who can forget your brilliant star-turn in his film Made? One of my faves, I must say.

"Ahh, yes! Quite a tour de force, wasn't it? [laughs] You could call Made my don't-quit-your-day-job-film role and not be entirely wrong."

OK, Iron Man 2. Now, you worked on the score for the the first Iron Man...

"That's right. And when Iron Man 2 was percolating, I was asked to be involved in the new score. Of course, I said I'd be glad to. I had a great time working with John Debney. He's a brilliant, terrific fellow, and an incredible composer. My responsibilities here were pretty straightforward: make it rock! So that's what I set out to do."

Aside from "make it rock," were you given any other kind of direction?

"It was pretty collaborative, actually. John and I talked about what was needed in the picture, in individual parts and the movie as a whole, and then I basically spent a whole day in the studio just rocking out, which was a blast. Grooves, riffs, themes, crazy sounds - I just went for the whole bag.

"Then we took what I did, along with the emerging orchestral score that John was working on, and tried to figure out how to bring the ultimate rock power to the proceedings. It's very interesting, the process. Even though you're working with snippets of film and time codes and all that, it's a lot of fun. It's like figuring out a puzzle: How can you make five seconds rock out massively?"

"There's two elements to something like this. On the one hand, I'm creating wholly original material, building a track from scratch. And the second part of it, be it a symphony section or even just a drum loop, I'm doing what I can to augment what's there and make it as effective as possible."

Have there been film scores from that past that you referenced or composers who have influenced you?

"That's a good question. You know, I never looked at this like, 'How can I emulate this classic film score composer?' And I'm sure the people involved with the picture didn't see it that way, either. They didn't hire me to squeeze me into some other box; they hired me to be Tom Morello. They wanted me to bring the big fat rock to the score and be as heavy and electric as possible.

"Actually, to expand on your question, a very key part of this was that they specifically didn't want me to reference other film scores or do things that have already been done before. Paying homage to classic composers isn't the game here; doing something new and cool is. Hopefully, I've done just that."

When working on a project like this, how much music are you supposed to come up with? Are you given a set number of minutes?

"You know, you'd think that, but the answer is no. I wasn't really told, 'OK, we need X number of minutes of rock, Tom.' Because there was always a new cut of the movie, everything was always changing. Every few days I'd get a call from John who would say, 'All right, Tom, got some more scenes to send your way.' You have to be ready for anything they throw at you."

AC/DC songs figure prominently in the picture. Were you given any direction as to how to work around them?

"Those scenes didn't even get to me. I don't think they wanted any other kind of music getting in the way. It's not like they gave me the whole film and said, 'OK, go crazy, Tom.' They only gave me what they needed me for, nothing more."

Obviously, you're famous for your inventive bag of audio tricks. Does that ever figure into the discussions? Did John or anybody say, 'Hey, we really like what you did on Bulls On Parade. Could you give us a little taste of that?'

[laughs] "Not so much. I was pretty much given free reign to do whatever came into my head - within the constraints of tempo and key. I tend to work in 4/4 time, and when the score was in these more exotic, orchestral time signatures, that could be a challenge to my dexterity. But hey, it was a challenge I was fiercely determined to rise to and meet."

Were other musicians working with you on your tracks, or did you do it all yourself?

"When I was creating the original music, I brought in the Freedom Fighter Orchestra, the guys who play with me in The Nightwatchman and Street Sweeper Social Club - that would be Dave Gibbs on bass and Eric Gardner on drums. They were the backing band for the raw tracks."

Do you find that you use different guitars for scoring films than on band projects?

"Actually, no. I brought the main ones I always bring with me to any session: my Arm The Homeless guitar, the Tele for the drop-D rocking and my trusty Les Paul. But let me tell you, John Debney has a crazy collection! He has this Stratocaster from the 1950's that's worth half the budget on the film. [laughs]

"It's funny: I'm not a big guitar collector in any way. I have my trusty arsenal that I love and I keep things pretty tight. But I do love checking out other people's collections, especially when they have some really fine instruments. Come to think of it, I did use a couple of John's guitars. I can never remember the years or anything. Like I said, I'm not a collector."

"That's right. I've done some stuff for the upcoming A-Team movie. I get to create some big fat rock on that, as well. I guess that's become my niche."

"That's me. [laughs] Frankly, I'm really enjoying this kind of work. Film scores, for me at least, are a lot of fun and easy to do. You want the rock? Give me a call."