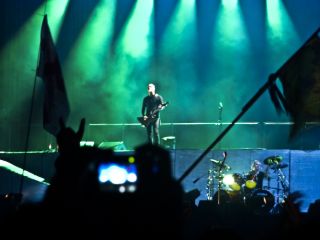 There's been speculation for months now about a tour involving all of thrash metal's 'Big Four', and now, the organisers of Sonisphere have revealed that Metallica, Slayer, Megadeth and Anthrax will play together for the first time in history in 2010.

An official press release this morning carried the following statements from members of the unholy foursome:

Lars Ulrich comments: "Who would have thought that more than 25 years after its inception, thrash metal's 'Big Four' would not only still be around and more popular than ever, but will now play together for the first time... What a mindfuck! Bring it on!"

Slayer's Kerry King is similarly enthusiastic: "It's about fucking time this happened and about time the fans finally get what they want. This is fucking awesome."

Anthrax guitarist Scott Ian emphasised the event's historical significance: "No other four bands as influential as the four of us have ever done this. Imagine if The Beatles, Stones, The Who and Zeppelin had done shows? Or Sabbath, Priest, Maiden, Motörhead? Well, I may be getting into some rarified air here but as a fan, that's how big I feel this is."

The release continues: "On 16 June 2010, Metallica, Slayer, Megadeth and Anthrax will take to the Sonisphere stage at Bemowo Airport, Poland, to make the dreams of headbangers the world over become a reality.

"A second Big Four appearance is planned for Sonisphere Czech Republicthree days later, with more Sonisphere shows featuring the awesome combo to be announced in the coming days and weeks."

Whether or not this will include the UK remains to be seen, but tickets for Sonisphere Knebworth with a free Poland ticket offer are on sale now at www.sonispherefestivals.com.

Dave Mustaine has the last word: "If there are any heads left at the end of this festival that haven't banged, they don't belong there."