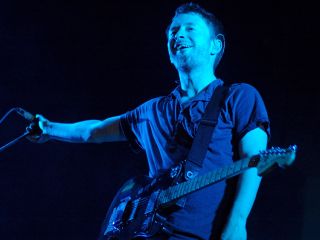 "Back" as in how? And with whom? (Image credit: David Rae Morris/epa/Corbis)

Thom Yorke's recent spate of side-project gigs in Los Angeles have gone so well that he told the audience at Monday night's Orpheum Theatre show that he would be "back" next year.

Which begs the question: What exactly does "back" mean? Solo? With Radiohead? Or with the same unnamed band - Red Hot Chili Peppers bassist Flea, REM/Beck sticksman Joey Waronker, multi-instrumentalist Mauro Refosco and Yorke/Radiohead Nigel Godrich - who backed him in LA?

As they say, tongues are wagging.

With Flea about to settle back in with the Red Hot Chili Peppers, getting the same group of musicians together next year might be difficult. Still, as that band records in Los Angeles and generally take their time in the studio, it's not inconceivable that Yorke could play with the unnamed fivesome once again.

Monday night's set contained the same setlist as prior LA shows (both at The Orpheum and two 'warm-up' dates at The Echoplex). Check out the fan-shot video below from Monday of the band performing Yorke's recent single Feeling Pulled Apart By Horses.

Not bad. Not bad at all.