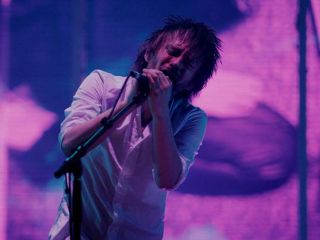 The single is available as a free download from the members' area of Radiohead.com for fans who pre-ordered the limited 12-inch vinyl single. (Yorke has blogged that the single will be obtainable as a conventional download around 6 October.)

The video for Feeling Pulled Apart By Horses was directed by Raymond Harmon and features 'subliminal imagery' courtesy of graffiti artist Banksy. You can check it out below.

It is still unclear whether the song or its flipside The Hollow Earth (below) will be featured on the Twilight: New Moon soundtrack, as has been speculated. An announcement is due soon.