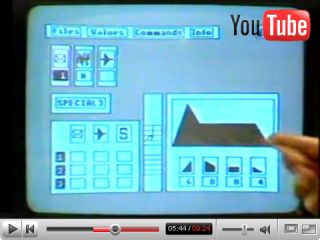 There´s been no bigger internet phenomenon for musicians than YouTube, but the sheer volume of videos is staggering. Every week MusicRadar is going to bring you a roundup of what we´ve found and what we like. You know the drill: add your own favourites and share your tips on the best of YouTube for music makers...

1. The most popular guitarist on YouTube
A must see: ‘Funtwo´s version of Johann Pachelbel´s Canon. There´s an interesting backstory on player Jeong-Hyun Lim too.

4. Many hands make light work
Playing guitar is easier with a friend. Here´s one guitar and four hands.

5. The best guitar players on YouTube.com?
MusicRadar is sure you know different….

1. Computer music in 1985
See what the ZX Spectrum and Commodore 64 were capable of in this archive clip from BBC Television show Micro Live.

2. The making of the Dr Who theme tune
Take your own trip back in time and find out how this classic theme was created using the Yamaha CS-80 and Arp Odyssey synths.

3. Kanye needs a new kick
See what happened when Kanye West went into the studio with Timbaland to work on a new mix of his hit single Stronger.

4. The loudness war
A good overview of what it is, and how it´s having an effect on the music that we listen to.

5. The Video Game Pianist
As we´re on a Mario tip this week, here´s a clip of the moustachioed caperer´s themes being played by a sometimes blindfolded chap.

1. 12 year-old Tony Royster Jr drum solo
Young Mr Royster is most famous for winning the Guitar Center National Drum-Off at the age of 11. Here´s a clip of him in action.

2. Thomas Lang drum madness
The best drummer in the world? Discuss below...

3. Travis Barker playing upside-down
A take on Buddy Rich´s classic trick - on a much bigger scale.

4. Death Metal Office Drumming
Well, on a slow day it beats chatting about TV at the water cooler...

5. Super Mario. Again! On drums!
When will it ever end?

Bored of playing?
No problem. James Brown can give you dancing lessons. Badass.