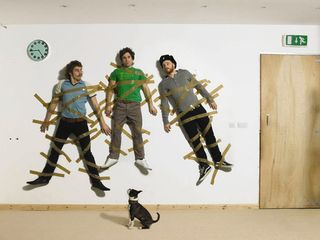 The Hoosiers are set to break records with the release of a 43-minute charity single, Choices, out on 1 August.

Going well against the conventional 3-minute track, Choices will see The Hoosiers break the record for, 'the longest download single in history', and 'the longest pop song ever to be released in the UK'.

The song was written with the help of fans, who had the chance to submit a verse in hope of it making the final selection and have their photo shown on the music video. Special guests Katy Brand and Jeff Leach are also involved in the project.

The English-Swedish trio are donating all proceeds to Teenage Cancer Trust so - love or loathe the band's unique brand of pop rock (see Goodbye Mr A and Worried About Ray for a reminder) - dig deep. And clear some space on your iPod…