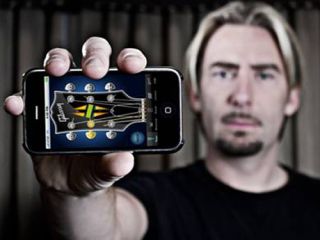 PRESS RELEASE: Gibson Guitar, the world's premiere musical instrument manufacturer and leader in music technology, is proud to announce the highly anticipated launch of the Gibson Guitar app. This free to download app will be available exclusively for all Apple iPhone and iPod Touch users directly from the Apple App Store 25 February 2010.

This is one app every guitarist and fan of Gibson Guitar must own. Over the past two years over three billion apps have been downloaded around the world, the Gibson Guitar app cements Gibson's reputation as the industry's leader in innovation and music technology.

The Gibson Guitar app includes a number of special features, such as a traditional chromatic tuner which starts in 'All Notes' mode that tracks whatever is played. Owners of the App can choose a tuning on the 'Mode' page so the tuner will only track notes for that particular tuning.

Also included is a standard chromatic tuner, a simple tuner which allows less advanced users to tune to Standard tuning Open G, Open D etc by touching the key. For iPhone users, the Gibson headstock inlay will automatically change color indicating if the string is sharp, flat or in tune. For iPod Touch users they can turn the "Play Notes" option on so they can hear the appropriate tuning since they do not have a microphone facility.

The Gibson app also features a standard metronome that allows users to choose a specific BPM or tap the screen three times to automatically set the tempo. Other key features of the app include over 30 chord charts with finger markings to help the user with mastering the chord.

For those who prefer to learn new guitar riffs, licks or chord sequences via video tuition can now have that option from their Gibson App. The app will be updated frequently with new video content so users of all guitar ability can improve their technique from the comfort of their home.

For those who want to keep up with everything Gibson Guitar related including the announcement of new products, artist activity, news stories, interesting and factual features, exclusive contests and special events to name a few can now do this via the Gibson.com option.

By popular demand the Gibson Guitar App is a multi-purpose and fully interactive guitar application which can be used at home, on the road or in the Studio. It's a must have for guitarists and music enthusiasts of all ability and style, and best of all it's free. Get yours today.