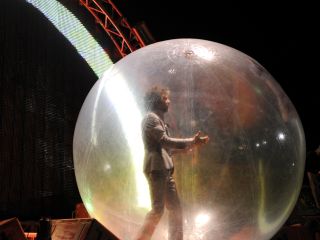 Tonight (31 December), The Flaming Lips will perform Pink Floyd's Dark Side Of The Moon in its entirety as part of their annual 'Freak Out' in their hometown of Oklahoma City, Oklahoma.

It'll be the usual Lips affair, which means it'll be most unusual, full of psychedelic lights, pyrotechnics and culminating with frontman Wayne Coyne venturing into the audience in his giant hamster ball. (Speaking of which, the show will also feature what is said to be the world's largest mirror ball. Bet you're sorry you didn't book a flight now, aren't you?)

The Flaming Lips will be joined on stage by the band Stardeath And The White Dwarfs, which is fronted by Coyne's 27-year-old nephew Dennis. The two groups recently collaborated on an exclusive iTunes recording of Dark Side Of The Moon, an undertaking that Wayne describes as "a joke that turned out to be anything but."

I started a joke

It all started earlier this year, when iTunes approached both bands in the hopes that they would record some new material, together or separately. "Trouble was, we didn't have anything," says Wayne. "So, kind of kidding, I said, 'Hey, why don't we record Pink Floyd's Dark Side Of The Moon'? And then the joke wound up being on me because they loved the idea."

Once the bands were given the go-ahead to record the Floyd classic, Dennis Coyne describes the situation as "incredibly daunting. It went from this fun idea - 'All right, they're letting us do it!' to 'Oh, no…they're letting us do it.' But we decided very quickly that we weren't going to try to repaint a Picasso line-by-line; we were going to have our way with it. And then it became a blast."

Whereas Pink Floyd's original album took over a year to record at the legendary Abbey Road Studios, The Flaming Lips and Stardeath knocked their cover version out in a matter of days at a friend's studio in nearby Norman, Oklahoma.

"Thank goodness we did it fast," says Wayne. "Otherwise, we would have overthought it. We went in with the intention of making it loose and spontaneous, freaky and punk rock. 'Oh, there's a wrong note? Too bad, leave it in.' 'Oh, you were rushing the beat during that section? Sounds good, don't change it.' We were meticulous about maintaining a crazy purity. Sometimes that's the only way you can make art."

With guest turns by Peaches and Henry Rollins ("Who would've put Henry Rollins and Dark Side Of The Moon together in a million years?" muses Wayne), the Lips/Stardeath version is art all right, if your idea of art is a hodge-podge of sounds both cheesy and overwhelming, with moments of unbearable beauty followed by cringe-worthy kitsch.

"In our own weird way, I hope we've done the record justice," says Wayne. "I always loved Pink Floyd, and to me, Dark Side Of The Moon was the be-all and end-all. Even when punk rock came around and there was this anti-Floyd vibe everywhere, I was always the guy to go, 'Well, I'm totally into them.' Which in itself was a kind of punk rock statement, to go against the grain. I was never ashamed of liking the Floyd."

Dennis heartily agrees: "Floyd were one of the best album-bands ever. Each record was a trip, a sonic and emotional experience that could change every time you put it on. For us to cover even one of their albums is an honor. That we got the chance to do Dark Side Of The Moon...hey, I can go to heaven a happy man!"

Buy Dark Side Of The Moon by The Flaming Lips and Stardeath And The White Dwarfs here: iTunes