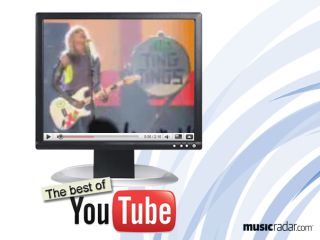 The Ting Tings at the Brits

This time around we're got U2's Get On Your Boots (but with more cowbell!), '60s pop, G-Funk covers, nose flute classical and more. Oh, and a beatboxing cook...

U2's Get On Your Boots with xylophone and MORE COWBELL!

Here's The Wrecking covering the new U2 single. Good job. In fact, it's even better than the real thing. Michael Leonard

A Day In The Life

The Ting Tings vs Estelle at the Brits

A seriously banal Brit Awards ceremony was enlivened by this live mash-up, which featured The Ting Tings' Shut Up And Let Me Go and That's Not My Name and Estelle's American Boy. It probably wasn't to everyone's taste, but at least this was a one-off: most of the other acts gave performances that we've seen a hundred times before. Ben Rogerson

Dell and Jay play Beethoven on their nose flutes

Beethoven's Symphony No. 9 incorporates part of the poem An die Freude (Ode To Joy) in the last movement. When first presented, it revolutionized music, using the human voice on the same level as instruments. In this clip, Dell and Jay, who appear to be father and son, perform Ode To Joy on nose flutes. Male bonding doesn't get any better than this. Joe Bosso

Rehearsing a sixties covers set for a charity show has reacquainted me with some real gems, not least this, a perfect sixties pop song. Those harmonies may be tough to execute, but they sound amazing when nailed. Chris Vinnicombe

Warning: explicit lyrics. Here's a clip of Ben Folds playing live favourite Bitches Ain't Sh*t - originally by Dr Dre. After knocking the audience dead with a cracking rendition, Folds proceeds to climb a massive ladder at the rear of the set. He then jumps, killing himself. (Not really... I think it may be done with special effects...) Chris Wickett

Funny you should ask because they sound exactly like this. Sorry, I'll shut up about Steampunk now. Tom Porter

Here's an incredible video of a beatboxer delivering a lesson in break-baking. The video is unattributed, but we're fairly sure the beatbox cook in question is the amazing Beardyman.