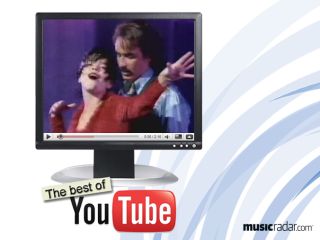 Björk and Tony Ferrino get up close and personal

This week we've got everything from folk instruments and guitar tunings to ridiculously tight live drum and bass.

Jojo Mayer on the Amen break, drum and bass and breakbeat

Jojo Mayer's ultra-precise beats and breaks have made him one of the world's foremost drum and bass drummers. Here's a video from Mayer where he explains the ideas behind drum and bass, jungle and breakbeat drumming, from the Amen break to the influence of sampling. Chris Wickett

Steve Coogan's Tony Ferrino character missed the comedic target as many times as he hit, but memorably, he did manage to convince Björk to duet on A Short Term Affair for the BBC's Comic Relief spectacular. Best line from Ferrino to Björk: "Tell me, in Iceland do they have a chain of frozen food stores called England?". Apologies for the poor video and sound quality. Ben Rogerson

Raspberries - Go All The Way

TV host Mike Douglas gives a goofy intro to the Raspberries, but no matter, it's the song that counts, and this one's gold. By decade's end, The Knack would traffic in the same sort of sounds-innocent-but-it's-not material, but Eric Carmen and co. did it first, and better. Check out drummer Jim Bonfanti, who was obviously told not to play too hard - the music is on tape but the vocals are live - boy, is he bummed! And there's even a post-song interview featuring Billie Jean King and Joe Namath. What more do you need? Joe Bosso

With folk guitar pioneer Davy Graham sadly passing away, it seemed appropriate to tip a hat to DADGAD, a modal tuning he helped popularise. Not a lot people can do it well. Simon Fox can. Or watch Jimmy Page and Led Zeppelin's Kashmir at Knebworth in 1979, or this guy covering the (played in DADGAD) The Inlaw Josie Wales by Phish. Michael Leonard

Why the hell did I waste my teenage years trying to learn Nirvana riffs and Noel Gallagher's Married With Children solo when I could have been jamming out some Bluegrass on a mandolin? Probably because I didn't have a mandolin. Regardless, these kids are a product of a well-spent locked-in-a-bedroom-practising-all-day youth. Tom Porter

Here, at 13 foot, is the world's biggest ever Fender Stratocaster. Or are these just very small men?