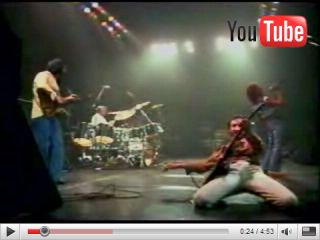 Clips like this make us hope that The Who aren't indeed splitting up...

For the Best Of YouTube this week, we've got our own personal recommendations from the MusicRadar team. Some clips we really like, others are simply comedy classics or oddly intriguing. But all are worth watching…

Beck gets it on
"In the week that saw Beck release the Danger Mouse-produced Modern Guilt, let's take a look at him singing Debra, the closing track from the often-derided-but-actually-very-good Midnite Vultures." Ben Rogerson

Gnarls Barkley get happy
"Speaking of Danger Mouse, here he is at Abbey Road performing Smiley Faces with Cee-Lo. He's brought a couple of his favourite synths with him, though he seems more interested in playing the tambourine." Ben Rogerson

Pete Townshend smashes a Strat
"Are The Who splitting up? Earlier this week we reported that Pete Townshend and Roger Daltrey might be throwing in the musical towel, meaning we'll no longer see spectacular scenes of six-string abuse as documented on this clip." Chris Wickett

Eric Clapton breaks a string
"Yes, it even happens to 'God'. But he keeps right on playing, and so should you." Joe Bosso

David Lee Roth isn't dead!
"With the welcome news that Van Halen singer was recently saved from nuts-in-mouth death, here's a celebration of the numbnut's none-more-'80s video - also starring Steve Vai and Billy Sheehan. They don't make them like this anymore. For good reason?" Michael Leonard

Frank Zappa is dead
"But revel again, all ye shredders, in this Frank Zappa and Steve Vai duet." Michael Leonard

Diamond Dave Mouths Off
"In extra honour of our Dave's recent nuts-related oral shenaningans, this snatch of Van Halen from 1983's US Festival is a classic. Some lead singers say "Cheers" between songs. Some say "This is a new one…" And some… some decide to spend what seems like half an eternity having a pop at the Clash for swapping Jack Daniel's for tea. Vote Dave!" Mike Goldsmith

Flower Travellin' Band: Satori
"As much as I would like to own the entire Top 50 recommended albums from Julian Cope's peerless Japrocksampler, if the entire book could all be boiled down to one song from one album, it would be this - Flower Travellin' Band's nuts out, edge-of-a-cliff, gonzo/prog/psych rock beamed in from 1971 (via Pluto) as only the Arch Drude could recommend. Click 'play' now - I defy you not to wail along with Hideki Ishima on 'sitarla'. Wail, damn you!" Mike Goldsmith

Taste and hear the rainbow
"I love beat sequencers, and I love Skittles (the candy sweets, not bowling pins). So what better way to celebrate a 'best of' than with a cardboard interface and a bag of beat-making Skittles? You could, of course, use any small object. But did I mention that I love Skittles?" Tom Porter

Love Is Noise by The Verve live at Glastonbury 2008
"When a band announces 'we're gonna play something new' to a live audience, the collective groan is usually audible from space. Why then, can Richard Ashcroft and co get away with closing a festival with a synth-laden newbie? Because they sodding well can." Tom Porter