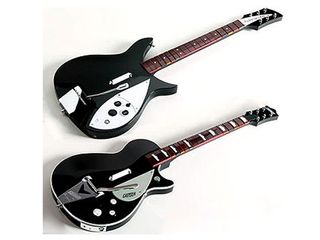 Even better than the real thing? Well...almost

The Beatles: Rock Band doesn't hit stores till 9/9/09, but the makers of the game have revealed the first photos of two of the vintage replica instruments: John Lennon's Rickenbacker 325 and George Harrison's Gretsch Duo Jet.

According to press release information, the plastic guitars will be available as "stand-alone music peripheral controllers" - another way of saying they won't be included with the Special Edition package that features the vintage bass, drums and microphone.

The guitars carry a price tag of $99, but it's unclear at this time whether that nets you one guitar or both.

As MusicRadar previously reported, replicas of Paul McCartney's Höfner bass and Ringo Starr's Ludwig-branded drums will be available, along with multiple microphones so that players can perform (or try to) the harmonies crucial to The Beatles' sound, in the $250 Special Edition package.

As of today, 5 May, the game is available for pre-order. After the pre-order purchase is made, gamers will receive a code that provides access to an otherwise-unavailable The Beatles: Rock Band website that offers breaking news, exclusive content and more.

Money can't buy you love, but apparently it can buy you The Beatles: Rock Band.