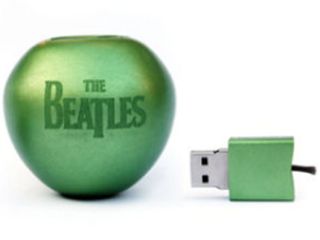 Will this replace the satsuma in your Christmas stocking?

It isn't quite the 'Beatles back catalogue available digitally' news that fans of the band have been waiting for, but the Fab Four are at least taking their first steps into the world of noughts and ones with the limited edition release of a 16GB USB apple.

In a curious move, Apple Corps Ltd and EMI Music are manufacturing 30,000 of these, each of which comes pre-loaded with 14 stereo remastered Beatles albums and 13 mini-documentaries. The apple will also contain replicated album art, rare photos and expanded liner notes.

Pleasingly, the albums are supplied in the lossless FLAC format - so audio quality should be up to scratch - though 320kbp/s MP3 versions are also featured.

The Beatles apple costs £200/$280 and is available for pre-order now (it'll ship on 7 December). Given that the remastered stereo CD boxset retails for £170, that doesn't seem too outrageous: the extra £30 effectively gets you a limited-edition 16GB USB stick, though obviously, the downside is that you won't own the albums in their physical form.